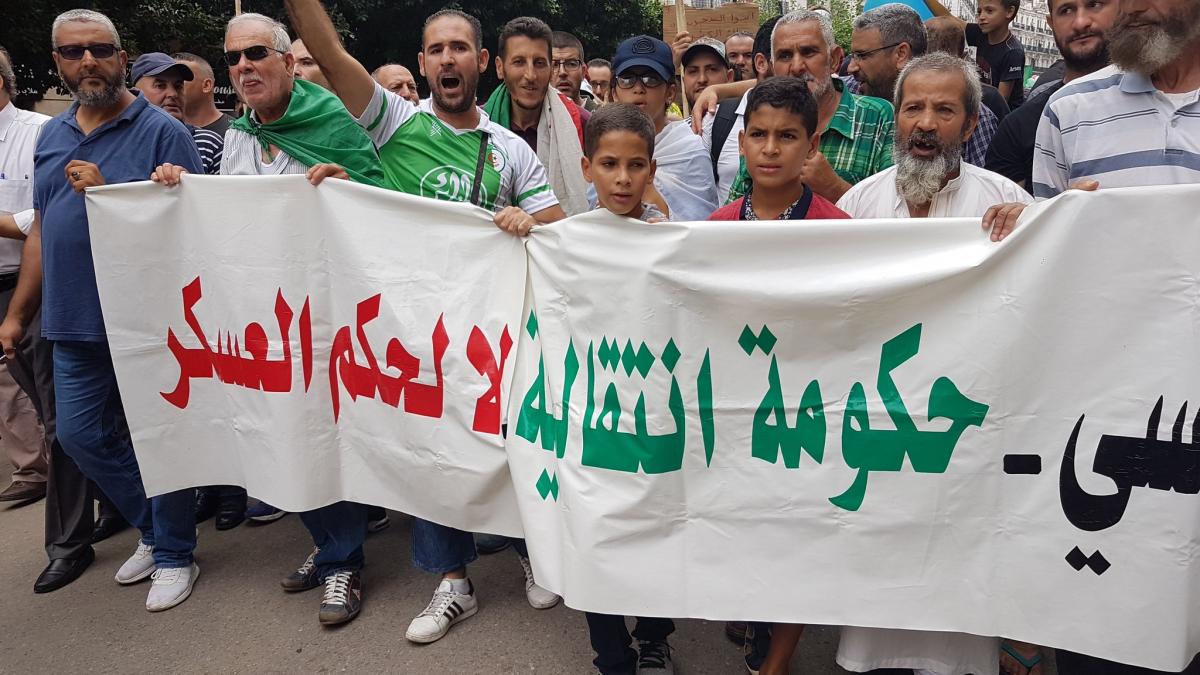 The protests in Algeria that began in February show no signs of fizzling out. On Friday, for the 30th week in succession, tens of thousands demonstrated in the capital and other cities – reportedly in increased numbers. According to the local TSA website it was the largest turnout since 5 July.

Two developments earlier in the week appear to have re-energised the protests. One was a speech by Gaïd Salah, Algeria's influential military chief, calling for a swift end to the country's political crisis. The other was the arrest of Karim Tabbou, a prominent opposition figure who appeared in court on Thursday charged with "weakening the army's morale".

Algeria has been without an elected president since April when demonstrations forced the 82-year-old Abdelaziz Bouteflika to step down after 20 years in power.

The election of his successor was originally due to take place on 4 July in accordance with the constitution, but in the face of objections from protesters the Constitutional Council decided to cancel it.

Disputes about the election's timing have arisen because the regime's opponents suspect a trap. Their ultimate goal is to dismantle Le Pouvoir – the corrupt network of political, military and business elites that has ruled Algeria for decades – and they fear that an early election would simply bring another representative of the old regime to power.

There's widespread public recognition of the need for reform but the question is whether it should come before or after elections. Some favour a transitional period to draft a new constitution and introduce other changes before the country goes to the polls. Others argue that holding elections first would minimise instability, though that would also mean less pressure on the regime to abide by its promises of reform.

Much of the protesters' wariness focuses on Salah, the 79-year-old army chief of staff, who despite having a relatively junior position in the current government – as deputy defence minister – has emerged as the regime's most powerful figure following Bouteflika's resignation.

Last week Salah called for a decision by 15 September on the holding of a presidential election. In effect, this would set the clock running for a 90-day period leading up to polls in mid-December. The timing would almost certainly give the regime an advantage because aside from any possible election-rigging the opposition is fragmented and ill-prepared. There are lots of small opposition parties and so far there's no obvious opposition figure who could mount a strong challenge against the regime's preferred candidate.

In his speech on Thursday, Salah insisted there should be no further delay. "Nobody has the power to interrupt or hamper the march of Algeria and block it from reaching its objective," he said, adding that a meeting of the Council of Ministers on 9 September provided a "guarantee" that the election would be smooth and transparent.

This "guarantee" is based on recommendations from the government-appointed National Forum for Dialogue and Mediation. Besides calling for a presidential election to be held in "the shortest possible time", the panel proposed:

According to Salah, electoral preparations will require two new pieces of legislation – revision of the electoral law and a law to establish the National Authority for Elections.

As far as the panel's other recommendations are concerned, the government's resignation is still awaited and if the authorities are serious about building a "climate of trust" arresting Karim Tabbou seems an odd way to go about it. Tabbou, spokesperson for the Union Démocratique et Sociale (UDS) party appeared in court on Thursday and was remanded in custody.