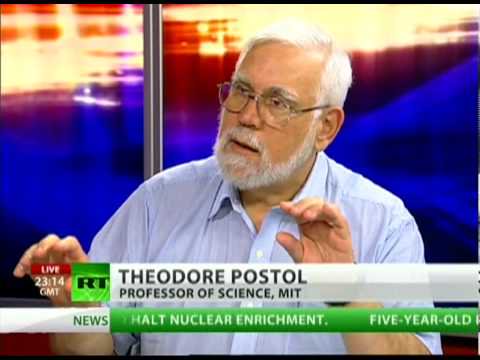 An emeritus professor at the renowned Massachusetts Institute of Technology (MIT) has angrily resigned from the board of a science journal after it declined to publish a paper he co-authored about a nerve agent attack in Syria.

In his resignation letter, Theodore Postol, an MIT expert on missile defence and nuclear weapons, accused the Science and Global Security journal of making a "grievous mistake". Its decision not to publish the paper "fundamentally contradicts the most basic goal to protect honest technical discussion that is the foundation for the advancement of science," he wrote. "This decision is incomprehensible and inconsistent with everything I have stood for in my career."

Postol copied the letter to a journalist for Science (sciencemag.org) who first reported the resignation. 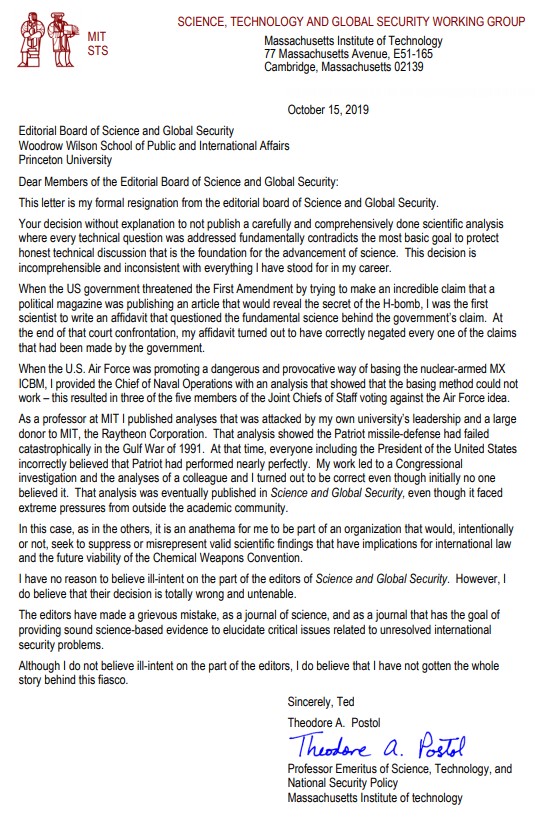 The paper, entitled "Computational Forensic Analysis for the Chemical Weapons Attack at Khan Sheikhoun on April 4, 2017", questioned the findings of a joint UN/OPCW investigation which concluded that the Assad regime had used sarin. According to the investigators the sarin had been released from a crater caused "by the impact of an aerial bomb travelling at high velocity". This implicated the Syrian military as the perpetrator, because rebel fighters had no aircraft.

Based on computer analysis, however, Postol et al claimed the crater had not been caused by a chemical bomb dropped from the air but by an artillery rocket armed with a small explosive warhead. If correct, this could mean rebels caused the crater, since they did possess rockets.

Postol, who has frequently disputed the regime's use of chemical weapons, was already promoting this idea a few months after the Khan Sheikhoun attack. In October 2017 he was in contact with Russia's Sputnik News which published a report summarising his claims about the crater but they did not attract much attention until August this year when Tulsi Gabbard, a Democratic contender for the US presidency who is also a chemical weapons sceptic, referred to them favourably on her website.

Gabbard's website included a link to the full text of the paper which had been posted on the internet. This allowed others to scrutinise its content in detail and a major flaw soon came to light.

Based on their calculations, Postol et al maintained the crater had been caused by a 122mm rocket – a type widely used in conflicts. What they had not done, however, was check their calculations against known examples of craters caused by 122mm rockets. Further research by the investigative website Bellingcat showed significant differences between those and the crater at Khan Sheikhoun.

Meanwhile, the Postol et al paper had been submitted to Science and Global Security (SGS), an international peer-reviewed journal with links to Princeton University. Postol was one of 17 members of its editorial board, though he is reported not to have been involved in discussions about the paper's publication.

In September SGS issued a statement noting that the paper had "become the subject of criticism" by Bellingcat but saying it would nevertheless be published in a future issue. It suggested the version posted on the internet and criticised by Bellingcat was "an earlier manuscript".

This was followed shortly afterwards by a second statement from SGS saying it had "identified a number of issues" with the paper's "peer-review and revision process".

"As a result," it said, "the editors have decided to withhold the publication of this article to examine whether the editors can rectify the problems that we identified."

In a further update on 12 October, SGS said it had now decided against publication:

"Having examined the concerns about the peer-review and revision processes for this article that led to the withholding of publication, the Editors have determined they cannot now rectify the problems that were identified, while others are outside of our control – including the manuscript, some comments from reviewers, and the authors' responses now being in the public domain.

"As a result, the Editors do not see a viable path to providing an independent, fair, effective, and conclusive blind peer review of this article by this journal. The Editors have decided to return this manuscript to the authors without prejudice and not proceed further with considering it for publication."

Because of his academic status Postol's views have often been cited approvingly by defenders of the Assad regime, though his previous articles posted on the internet about chemical weapons in Syria have contained some notable blunders.

In one article he claimed that an American intelligence report on the Khan Sheikhoun attack was "directly" contradicted by a French intelligence report. "The discrepancies between these two reports essentially result in two completely different narratives," he wrote.

There was a very simple explanation for these "discrepancies", however. The French report referred to a different attack in a different location four years earlier, and Postol later retracted his claim.

In another article about the Khan Sheikhoun attack, Postol disputed casualty figures by claiming the wind at the time would have carried sarin from the crater "across an empty field". In fact it was blowing in the opposite direction. Postol had mistakenly thought a south-easterly wind blows towards the south-east rather than from it and, once again, he issued a correction.