Douma investigation: a look at the leaked OPCW minutes 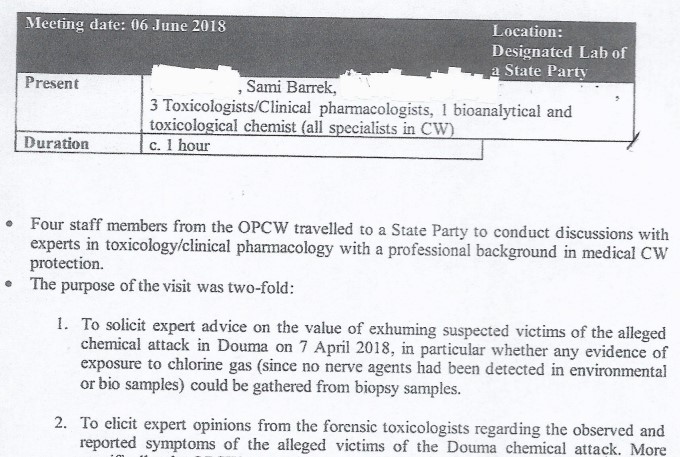 On 6 June 2018, four staff from the Organisation for the Prohibition of Chemical Weapons met a group of toxicologists in connection with the investigation of a suspected chlorine attack in Douma, Syria.

As part of the investigation the OPCW initially proposed exhuming bodies from mass graves but, two months after the alleged attack, it appeared to be unsure and this was the first topic raised at the meeting. The OPCW staff asked the toxicologists what information might be gleaned from exhumations. In particular, they wanted to know whether this might reveal any evidence of exposure to chlorine gas.

The toxicologists' advice was that for a variety of reasons, including the time since burial, "there would be little use in conducting exhumations, as the chances of gathering evidence would be almost impossible".

Minutes of this meeting were among documents posted online by WikiLeaks last month following claims from a mysterious whistleblower and others that evidence in the Douma investigation was deliberately manipulated to comply with the demands of western powers. The OPCW investigators found "reasonable grounds" for believing a chemical attack took place in Douma but Syria and Russia maintain it was faked by rebels to falsely incriminate the Assad regime.

When releasing the documents WikiLeaks apparently thought they would support claims that the investigation was rigged but their content suggests otherwise – and the discussion about exhumations is one example.

Among those who defend the Assad regime against accusations of using chemical weapons, the quasi-academic Working Group on Syria, Propaganda and Media has previously criticised the OPCW for its "failure to proceed with exhumations". The Working Group suggests the bodies photographed in Douma were not local residents killed by the regime in a chemical attack but captives killed by rebels in a "managed massacre". It implies the OPCW didn't exhume them for fear of what might be revealed.

However, the leaked minutes of the June meeting offer a far more straightforward explanation: that the FFM based its decision on the toxicologists' advice.

Following the discussion about exhumations the meeting then turned to the question of possible chlorine use in Douma. The toxicologists were shown photos and videos of alleged victims and asked whether the signs and symptoms they saw were consistent with chlorine exposure. The leaked minutes of the meeting say:

"With respect to the consistency of the observed and reported symptoms of the alleged victims with possible exposure to chlorine gas or similar, the experts were conclusive in their statements that there was no correlation between symptoms and chlorine exposure."

The doubts about chlorine expressed at the meeting have been interpreted by the OPCW's critics as supporting claims that Douma was a "staged" event, and also as a sign that the OPCW was cherry-picking evidence. The suggestion is that the OPCW didn't like what it heard from the toxicologists in June, so it disregarded their views and went searching for more acceptable opinions. Critics point out that the published report on Douma mentions "consultations" with toxicologists in September and October 2018 but makes no mention of the meeting the previous June.

The OPCW often holds consultations with outside experts for the purposes of its reports. It's not known exactly what such consultations involve, but hopefully they amount to more than the June meeting. It's clear from the leaked documents that the meeting – including the discussion of exhumations – lasted only about an hour and the toxicologists were not given all the available information. Also, rather strangely, if the discussion was being treated as a full-blooded consultation with experts, nobody bothered to produce any minutes at the time.

It was not until 20 August, more than two months later, that one of the staff sent an email to a colleague with draft minutes attached. The email, which is among other leaked documents, says:

"To keep a formal record of our meeting with the toxicologists we had in June I've compiled a summary of what I recall and had jotted in my notes ... Can you have a look and let me know if there is anything you think might be inaccurate or absent."

The leaked documents show two replies – one from Soumik Paul (OPCW head of Health & Safety) suggesting a couple of minor changes, and a more detailed reply from Marc-Michael Blum (head of the OPCW laboratory).

Blum's email begins by pointing out that while three of the toxicologists had a background in medical protection against chemical weapons they were not forensic toxicologists. The fourth person consulted was a bioanalytical and toxicological chemist.

Blum goes on to play down the significance of the toxicologists' remarks about the possibility of Douma being a propaganda exercise:

"I find the summary in minutes misleading that the other side in the end offered a conclusion with two possibilities: real chemical attack or staged. All we "gave" the experts were open-source videos and photos – so their insight was (and had to remain) limited.

"That the possibility of a staged attack was raised is part of required scientific scepticism but was in my opinion mainly fuelled by the fact that the circumstances of death for the victims do not match chlorine rather than corpses arranged for propaganda purposes.

"Regarding the observed symptoms I would write that they were not matching the chemicals listed by you but would remove "other known toxic gases" and rather put that no obvious candidate chemical causing the symptoms could be identified."

To this, the unnamed author of the minutes responds:

"Thanks Marc for your comments. I've addressed all three, I hope, in the minutes. I've reworded the two possibilities to make the language more neutral. For accuracy, I think it's important to have a record of their comments though, as it was a point raised by them. In addition to showing them open source videos, we did also brief them on the scenario and informed them of symptoms and times of onset reported by witnesses."

In March last year, after consulting other toxicologists, the OPCW reported:

"Based on the information reviewed and with the absence of biomedical samples from the dead bodies or any autopsy records, it is not currently possible to precisely link the cause of the signs and symptoms to a specific chemical."

Broadly speaking, this also concurred with the view from the June meeting, since on that occasion – despite their doubts about chlorine – the toxicologists had been unable to think of an alternative chemical cause for the signs and symptoms.

For the OPCW's critics, though, the main point of interest is the apparent ruling-out of chlorine at the June meeting. As recorded in the minutes, "the symptoms observed were inconsistent with exposure to chlorine", and since this wasn't mentioned in the published report on Douma it's seen as an example of evidence being suppressed.

But the idea of suppression hinges on a belief that the view about chlorine from the June meeting was correct and that nothing had come up in the subsequent meetings with other toxicologists to call it into question. In June, according to the minutes, the toxicologists gave two specific reasons for disputing the use of chlorine:

"In particular, they stated that the onset of excessive frothing, as a result of pulmonary edema, observed in photos and reported by witnesses would not occur in the short time period between the reported occurrence of the alleged incident and the time the videos were recorded (approximately 3-4 hours).

"The experts were also of the opinion that it was highly unlikely that victims would have gathered in piles at the centre of the respective apartments at such a short distance from an escape from any toxic chlorine gas to cleaner air."

Both of these points are debatable, to say the least, and have been discussed in detail on the Bellingcat website.

A couple of puzzles

There are a couple of intriguing puzzles about the minutes themselves. One is why someone decided, more than two months after the meeting, to write up minutes of it. There's no indication in the documents that anyone had been delegated to write them and had subsequently forgotten: the email accompanying the minutes doesn't say "Sorry they are so late". Instead, the writer of the minutes seems to have taken the initiative and simply decided, in the words of the email, to produce "a formal record" of what was said. Maybe this was in preparation for the scheduled consultation with other toxicologists in September, or maybe the minute-writer had some other reason for wanting to have a permanent record in the files.

The other puzzle is that WikiLeaks has concealed the identity of one of the four OPCW staff who attended the June meeting. It's clear from the leaked documents that they included Soumik Paul, Marc-Michael Blum and Sami Barrek (leader of the Douma investigation team) but the name of the fourth person has been redacted. It's also clear from the minutes that this unnamed fourth person was the one who wrote the minutes.

But why would their name be hidden? It can't be to stop the OPCW finding out, because Paul, Blum and Barrek already know who was with them at the meeting and who wrote the minutes. The only other explanation that comes to mind is that WikiLeaks has some reason for not wanting the public to find out.