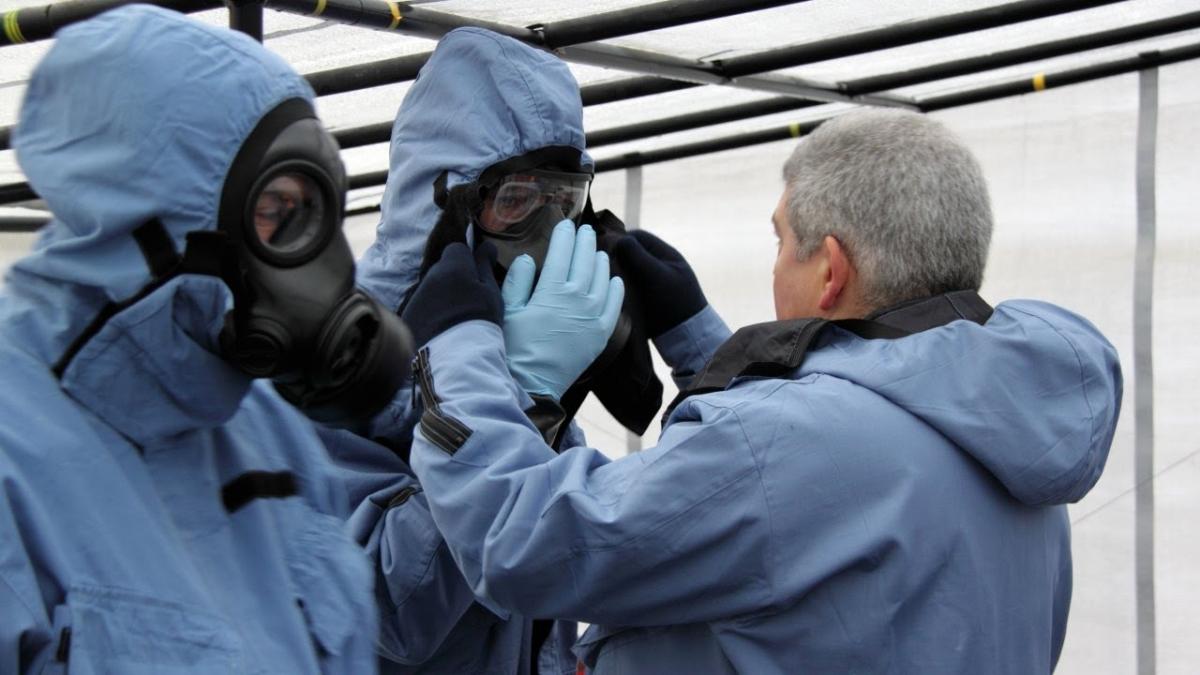 Towards the end of each month the director-general of the OPCW issues a report headed "Progress in the elimination of the Syrian chemical weapons programme". There have been 86 of these reports over the last seven years but what they reveal is not so much progress as a lack of it.

More than 20 meetings with Syria officials have failed to resolve all the unanswered questions and this week the chemical weapons watchdog's governing body, the Conference of the States Parties, will be discussing what to do about it.

Syria officially renounced chemical weapons in 2013 following a nerve agent attack in Ghouta which was widely blamed on the Assad regime. In the face of an international outcry it signed up to the Chemical Weapons Convention and was thus required to declare all its stocks and related production facilities – which were then to be destroyed or dismantled under the OPCW's supervision.

At first this seemed to be going reasonably well. The regime provided its declaration within the prescribed time limit and by 2014 all forbidden chemicals declared by the regime had been removed from Syria and destroyed. The OPCW also verified the destruction of all 27 chemical weapons production facilities declared by the regime.

Since then, though, there have been further chemical attacks in Syria which UN and OPCW investigators have attributed to Assad's forces. If those findings were correct, the obvious conclusion is that the regime had not revealed the full extent of its chemical programme when making the declaration.

Syria had initially declared four different chemical warfare agents but, following "consultations" with the OPCW, it added a fifth to the list. Almost three years after the start of this process, the OPCW reported that there were still four chemical agents detected through sampling whose presence the regime had "not yet adequately explained".

While some of the omissions might be ascribed to oversight or poor record-keeping by Syrian officials, further scrutiny by the OPCW's Declaration Assessment Team – coupled with the regime's unhelpful attitude – has fuelled suspicions of deliberate concealment.

Over the last few years numerous amendments have been made to the original declaration in the light of inspectors' discoveries and the OPCW has still not accepted the revised document as complete. There remain – to quote the official phrase – "gaps, inconsistencies and discrepancies".

For example, Syria's records showed it had produced some chemicals in larger quantities than were stated in the declaration – a discrepancy that the regime seemed to be struggling to explain. At one point it claimed to have used 15 tonnes of nerve agent and 70 tonnes of sulfur mustard for research – quantities that the inspectors found hard to believe since research would require only tiny amounts.

On the munitions front, there were similar difficulties accounting for 2,000 or more chemical shells which Syria said it had either used or destroyed – after purportedly adapting them for non-chemical purposes. Again, the inspectors doubted the truth of this because converting the shells into conventional weapons would scarcely have been justified by the effort and expense.

During one field visit inspectors noticed that remains of destroyed chemical munitions and production equipment which Syria had agreed to retain for further investigation had disappeared. A military official later told the inspectors he had sent them to a local smelting company where they were melted down.

On another occasion, reported by the OPCW last year, inspectors visiting a previously-declared chemical weapons production facility noticed some gas cylinders by a side road behind the facility. Syria said it had previously declared them but by that stage all declared material was supposed to have been destroyed – which raised questions about why the cylinders were still there.

Towards the end of 2018 inspectors visited the Barzah and Jamrayah branches of the Scientific Studies and Research Centre (which carried out chemical weapons research, among other things) and found "ongoing construction activities" at both sites. The OPCW "advised" Syria that in future it should be notified about "the nature and scope" of any such activity before construction began.

While visiting Barzah the inspectors also took samples. One of them revealed a Schedule 2 chemical (ethyl ethylphosphonate) which laboratory reports said "could be the primary hydrolysis product" of a Schedule 1 chemical. The Syrian authorities said they would look into the matter but two years later the OPCW reports that Syria "has yet to provide sufficient technical information or explanations".

Despite revisions to Syria's original declaration, this month's "progress" report from the OPCW's director-general reiterates that it "still cannot be considered accurate and complete" – there are 19 outstanding issues yet to be resolved.

One of these is a dispute about what the OPCW refers to as a chemical weapons production facility. Syria denies the facility has ever been used for that purpose but the OPCW says a review of all the evidence, including samples, "indicates that production and/or weaponisation of chemical warfare nerve agents" took place there.

The facility is not named in the published report but two sites in Syria have previously been identified as the subject of such disputes. Both were described in an article for Foreign Policy magazine by Colum Lynch, a journalist who gained access to a confidential report produced by the Declaration Assessment Team.

One of these sites was an underground facility on the outskirts of Damascus known as Hafir 1. "Samples collected at the site revealed the unmistakable presence of sarin in the equipment used to mix the banned warfare agent and pour it into Soviet-era Scud or Tochka tactical ballistic missiles," Lynch wrote. "They also betrayed traces of precursors for another, even deadlier nerve agent, VX, that Syria did not initially acknowledge using at the site. More signatures of sarin were detected in two mobile filling units parked above ground at the complex."

When presented with this evidence, Lynch wrote, Syrian officials "offered a series of evolving, and often contradictory, explanations" which further aroused the inspectors' suspicions.

The other disputed site was an underground facility called al-Sayed, about 25 miles west of Homs. According to the Syrians it had been intended for mixing sarin and filling munitions with it, but the project had never been completed. However, soil samples collected by the inspectors revealed traces of sarin's main ingredients.

In the months following this discovery Syrian officials came up with a variety of explanations – none of which the OPCW inspectors found scientifically plausible:

● Because of international sanctions Syria was forced to install equipment at al-Sayed which had been cannibalised from other facilities where it had presumably been contaminated.

● Because of the conflict, Syria was forced to move equipment around the country to prevent it falling into the hands of opposition fighters and chemical traces might have been carried on the tyres of trucks transporting it.

When these suggestions failed to impress the inspectors the Syrians suddenly recalled a top-secret experiment a decade earlier which had sought to combine sarin and VX in a single warhead. The experiment had failed, causing a large spillage which could be the source of the chemicals found in the inpectors' samples, officials said.

Regrettably, though, they could not provide any of original documentation relating to this alleged experiment.