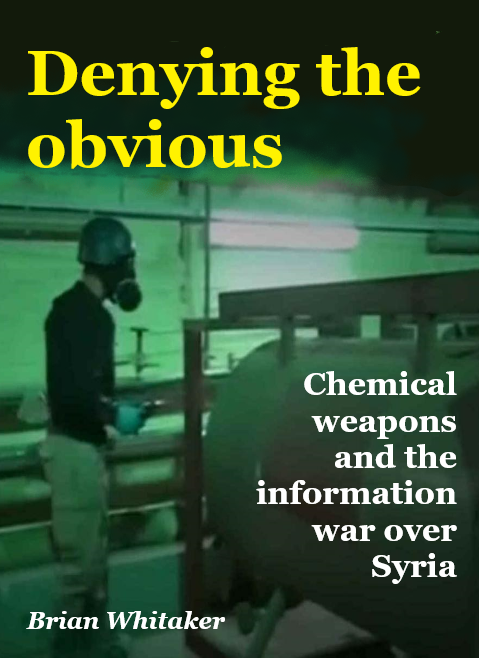 Hundreds of people died – many of them in their sleep – when rockets laden with the nerve agent sarin hit Ghouta, a rebel-held area on the outskirts of Damascus, in the early hours of 21 August 2013. It was the deadliest chemical attack anywhere in the world since the 1980s and it caused international shockwaves.

The regime’s guilt was beyond reasonable doubt though it denied responsibility and Russia, as its chief ally, weighed in with vigorous support. So too did a number of small groups and individuals in the west – apparently sincere people who convinced themselves that one of the Middle East’s most oppressive regimes was the innocent victim of a plot to discredit it.

Among them were an assortment of university professors, retired spies, “independent” journalists, “anti-imperialists” and more than a few habitual conspiracy theorists. They accused rebel groups of faking the chemical attacks – a claim that became the starting point for a disinformation campaign stretching far beyond Syria.

I began following the deniers' activities and after several years writing about them in blog posts I felt it was time for a more rounded and cohesive account. The result is 'Denying the Obvious' – an e-book published online today and also as a downloadable PDF version.

'Denying the Obvious' charts the course of the campaign – how it originated, the ideas that drove it, and how it was choreographed with assistance from Russia – but it also looks at the broader context.

Defending the Assad regime against charges of using banned weapons soon became an exercise in “post-truth” politics where hunches and assumptions took precedence over evidence and facts. By its own admission the regime had been manufacturing sarin, and laboratory analysis of samples showed the type of sarin used in attacks matched that in the regime’s stockpile.

Undaunted by such evidence, the regime’s defenders persisted in claiming the reports of chemical attacks were part of a conspiracy to deceive. Western powers, as they continuously pointed out, were known to have used lies and deception in the past – so why not now, in connection with Syria? As it happened, there was one notorious example of such deception that had particular resonance among the public and was ripe for exploitation: false claims about weapons of mass destruction in Iraq had been used to build public support for the US-led invasion in 2003, and the campaigners cited the Iraq war relentlessly to suggest Syria was a similar case (even though it wasn’t).

Defending Assad in this way had far-reaching implications, because in order to believe the claims of deception it was also necessary to believe that international investigators from the UN and the Organisation for the Prohibition of Chemical Weapons, along with western governments’ intelligence agencies and almost all of the mainstream media had not only got it wrong but were deliberately concealing the truth.

Denial of chemical attacks in Syria thus became the vehicle for a generalised assault on the credibility of governments, institutions and media in the west. This was the most insidious part because it coincided with broader Russian efforts to undermine confidence in western systems of government and it helped to fuel the populist trends epitomised by Britain’s vote to leave the European Union and the election of Donald Trump in the United States.

It also reinforced a variety of other conspiracy theories based on the presumption of a massive attempt to fool the public. It was no coincidence that among believers in the Syrian rebels’ fakery there were plenty who disputed the “official” version of the 9/11 attacks on New York and Washington and later, when the Coronavirus pandemic broke out, who could be found on social media denouncing lockdowns, face masks and vaccines as a sinister plot to impose control over people’s behaviour.