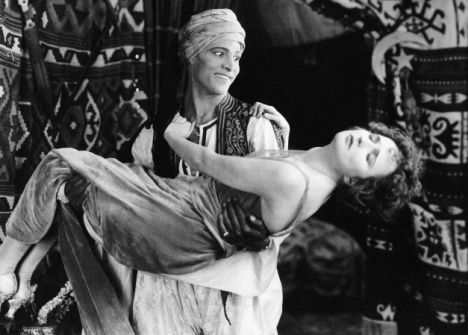 Rudolph Valentino in The Sheik (1921)

From Valentino to Bin Laden

Rollover (1981). Saudis as a sinister force trying to ruin the American economy.

Protocol (1984). Unsophisticated cocktail waitress is whisked off to the kingdom of El Ohtar (rathole spelled backwards) where the sheikh will not allow America to build a military base unless she joins his harem.

Iron Eagle (1986). US Air Force pilot is shot down by radical Middle Eastern state. His son and a mate borrow two planes to get dad back and zap the Arabs.

Rules of Engagement (2000). Arab mob attacks US embassy for no apparent reason. US troops massacre them. Just what they deserved.

The 'towel-heads' take on Hollywood
Arabs accuse US filmmakers of racism over blockbuster. By Brian Whitaker, The Guardian, 11 August 2000

The 'towel-heads' take on Hollywood
Rules of Engagement joins a long line of Hollywood films portraying Arabs and Muslims as fanatics, extremists, bombers and terrorists.

Black Hawk Down
Ridley Scott's film about the 1993 American military fiasco in Mogadishu.