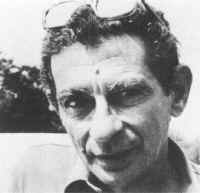 Youssef Chahine (1926-2008) was probably the greatest Arab film director. The notes below were issued by Channel Four television before his death, to accompany a season of Arab films shown on British TV in the late 1980s.

Youssef Chahine, director of some 40 films, is probably the most independent of Arab film-makers, producing what he thinks is important, even at his own expense, and raising issues that disturb.

Born in 1926, son of a Syrian lawyer and a Christian family in Alexandria, Egypt, Chahine attended the prestigious Victoria College. He dreamed of the cinema and theatre, watched Hollywood musicals, and in 1946 left to study drama in California. Chahine’s early films in Egypt included Raging Sky (1953), begun while Farouk was still King and dealing with a peasant farmer’s challenge to a feudal landlord. But the first truly indicative film of his style and preoccupations was Cairo Central Station (Bab al-Hadid), in 1958.

Chahine himself plays the central character, Kenaoui, a simple-minded man, beneficently employed as a newspaper-seller. He cuts pictures of women from magazines for the station hut he lives in, but a living focus of his sexual frustrations is Hanouma (played by the popular actress Hind Rostom), who sells lemonade and is engaged to Abou Serib (Farid Chawqi), porter and trade union organiser. With unthinking but affectionate playfulness Hanouma exacerbates Kenaoui’s frustration and adds to his confusion which leads to tragic death. Egyptian audiences, used to simpler melodramas, were disturbed and rejected the film. It was not seen again for some 20 years.

In 1963 Chahine made Saladin (original title: El Nasser - defender/deliverer - Salah ed-Dine), an epic, three-hour film in CinemaScope named after the 12th Century Sultan who, as the film begins, is preparing to liberate Jerusalem from its Christian Crusader occupiers. It was scripted by Naguib Mahfouz and the poet and progressive writer, Abderrahman Cherkaoui, and a parallel between Saladin and President Nasser is easily drawn. Saladin is shown as an educated and peaceable man - at one point he is asked to give clandestine medical help to Richard (the Lion Heart), shot by an arrow, and later he tells him: "Religion is God’s and the Earth is for all ... I guarantee to all Christians in Jerusalem the same rights as are enjoyed by Muslims."

A novel by Cherkaoui, serialised in 1952, formed the basis of The Earth (1968), noted particularly for its image of the peasant farmer - "eternal ‘damned of the earth’" - which broke with "the ridiculous image the cinema had (hitherto) given him" (Khaled Osman). There followed a further collaboration with Mahfouz on The Choice (1970), ostensibly a murder investigation story involving twin brothers, but with the underlying theme of intellectual schizophrenia. In 1976 he made The Return Of The Prodigal Son, a "musical tragedy", but four years earlier had made one of his greatest films, The Sparrow (1972), both co-productions with Algeria. A journalist and a young police officer meet while investigating incidents of corruption. They and other people of the left pass through Bahiyya’s house, whose name represents the idea of the mother country and is invoked in Cheikh Imam’s song at the end of the film. After Nasser’s announcement of the defeat in the war and his subsequent resignation, Bahiyya runs into the street, followed by a growing crowd, shouting "No! we must fight. We won’t accept defeat!"

In Alexandria, Why? (1978), Yehia, a young Victoria College student, is obsessed with Hollywod and dreams of making cinema. It is 1942, the Germans are about to enter Alexandria, thought preferable to the presence of the British. Yehia’s cousin is gay and ‘buys’ drunken British soldiers. Jewish friends are forced to leave and decide to settle in Palestine. In An Egyptian Story (1982) Yehia is a flim-maker, going to London (as Chahine had earlier) for open-heart surgery. He has a brief affair with a taxi driver. As a result of the operation, he reviews his life: moments of Chahine’s own films are replayed against their autobiographical and social historical context. Memory is very important to Chahine’s most recent work —whether of the "city of my childhood, Alexandria, between the two world wars tolerant, secular, open to Muslims, Christians and Jews" or of a more distant past: such as evoked in Adieu Bonaparte (1985), based on the cultural aspect of Bonaparte’s expedition into Egypt (1798). "Out of this marvellous confrontation there was a rebirth of Egyptian consciousness, of its past ... which belongs to humanity."

Youssef Chahine: an appreciation
by Nick Bradshaw. The Guardian,  28 July 2008

Youssef Chahine: a life in cinema
A guide to Youssef Chahine's films with extracts from 30 years of interviews, by Samir Farid. Al-Ahram Weekly, 31 July 2008.

Youssef Chahine
Notes about some of his films [Cornell University]