The leaked OPCW email: what does it show? 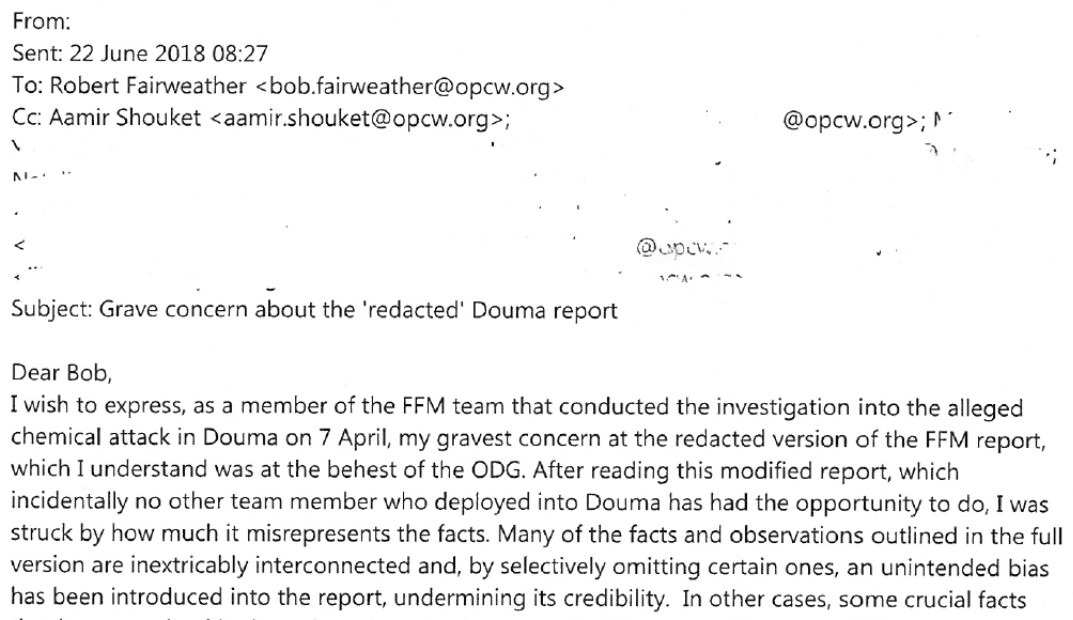 For several weeks defenders of Syria's Assad regime have been chattering excitedly about the emergence of a whistleblower from inside the Organisation for the Prohibition of Chemical Weapons. The whistleblower – known by the pseudonym "Alex" – is said to have emails, text messages and "suppressed" draft reports that show "irregular behaviour" by the OPCW during its investigation of an alleged chemical attack in the Syrian town of Douma last year.

The Douma affair is especially controversial because western powers immediately blamed the Assad regime and launched punitive airstrikes. The regime denies using chemical weapons and is supported in that denial by its chief ally, Russia, along with "anti-imperialist" elements on social media.

A subsequent investigation by the OPCW's Fact-Finding Mission (FFM) led to two reports on Douma – an interim report in July 2018 and a final one in March this year. In line with its mandate, the FFM didn't directly blame anyone but found "reasonable grounds" for believing a toxic chemical had been used as a weapon. The deniers claim its reports were politically manipulated to provide retrospective justification for the airstrikes and have hailed the whistleblower's allegations as support for this claim.

So far, though, the whistleblower has only spoken through third parties and until a couple of days ago none of the documentary evidence said to be in his possession was available for public view.

On Saturday, however, one document did appear – posted on the internet by WikiLeaks and presumably supplied by Alex. It's an email from an unidentified member of the OPCW's Fact-Finding Mission (FFM) to Bob Fairweather, a Briton who at the time was the director-general's chief of cabinet. 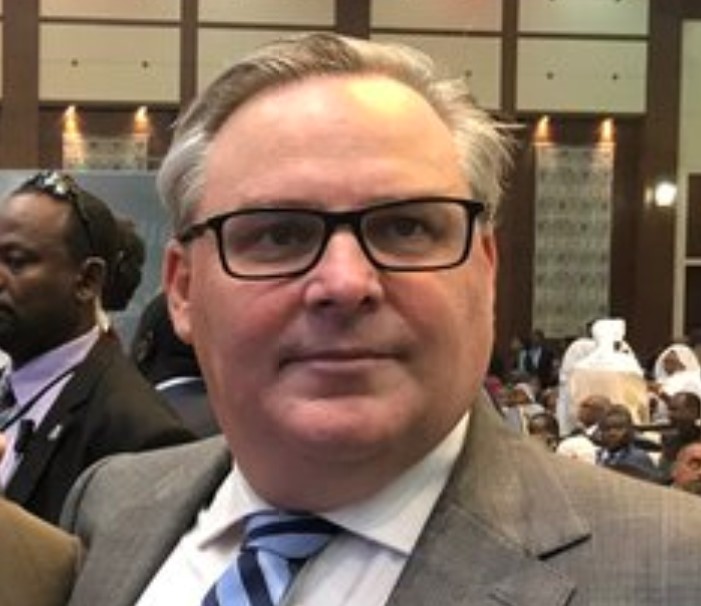 The leaked email is dated 22 June 2018 – a couple of weeks before the interim report was released – and discusses two unpublished drafts of the report which are said to have caused "huge internal arguments".

According to journalist Jonathan Steele, who has met Alex, there was an initial 105-page draft written by one of the FFM's inspectors and an alternative "doctored" draft produced by OPCW management. Both of these differed from the final published version.

The FFM member who wrote the email takes issue with the management's draft on three specific points:

● The management's draft said that chlorine or another reactive chlorine-containing chemical was "likely" to have been released from two cylinders found at the scene. The email says that while the cylinders might have been the sources of the suspected chemical there was "insufficient evidence to affirm this".

The email supports whistleblower Alex's claim that there were arguments within the OPCW over how to interpret the evidence from Douma and sheds some light on the nature of the arguments. However, it doesn't support Alex's more serious claim that the views of rank-and-file members of the FFM were constantly ignored or suppressed – or the suggestion that their reports were being manipulated by OPCW bosses for political reasons.

Based on what Alex is reportedly saying, it might be assumed that the email ended up in a bin, but that's clearly not what happened. A look at the final report on Douma, published last March, shows that the sender of the email eventually won the argument: all three points were taken on board:

● The final report described the cylinders as a "possible" source of the chemical rather than a "likely" one.

● The final report avoided describing the levels of chemicals found in the samples as "high" but noted that some were higher than others – there were "raised" levels of some chemicals close to the suspicious gas cylinders.

The email also complains about what was not said in the management's draft of the interim report – in effect, that it was misleading by omission. "Many of the facts and observations outlined in the full [105-page] version are inextricably interconnected and, by selectively omitting certain ones, an unintended bias has been introduced into the report, undermining its credibility," the email says.

The email voices concern about omissions relating to two specific issues. One was "the inconsistency between the victims' symptoms, as reported by witnesses and seen in video recordings". While some of the reported symptoms could be attributed to chlorine there were others that could not, and the email says this raised questions about the identity of any chemical involved.

The published version of the interim report did not ignore this entirely. It noted "mixed reports" in the media of what chemicals might have been used, but without commenting on them. After further investigation the final report failed to reach a firm conclusion. "It is not currently possible to precisely link the cause of the signs and symptoms to a specific chemical," it said.

The other "omission" issue raised in the email was that discussion about "the placement of the cylinders at both locations as well as the relative damage caused to the impact points, compared to that caused to the cylinders" was "essentially absent" from the management's draft.

The published version noted the cylinders but held back from drawing any conclusions about them. It said: "Close to the location of each cylinder there were crater-like openings in the respective reinforced concrete roofs. Work is ongoing to assess the association of these cylinders with the incident, the relative damage to the cylinders and the roofs, and how the cylinders arrived at their respective locations."

Further reading:
Syria and chemical weapons
A compilation of blog posts and documents looking at the arguments and the evidence

Obviously, what to say or not say in the report was a matter of judgement – and there were clearly differences of opinion about that. The underlying question, though, is whether the choices eventually made were unreasonable or, as some suggest, a sign of something more sinister.

What the email seems to overlook is that the interim report was not intended as the last word on Douma. It was basically a progress report which described the FFM's activities so far, said work was continuing to assess the cylinders, and presented the results from the first batch of lab tests.

It reported two important findings from the lab tests: firstly that there were no indications of a nerve agent being used (contrary to some of the claims at the time of the alleged attack) and secondly that "various chlorinated organic chemicals" had been found. It added: "Work by the team to establish the significance of these results is ongoing."

Since the investigation was still under way at the time of the interim report it was not unreasonable to decide that public discussion about the significance of this – and other findings – would be better left for the final report.