The OPCW whistleblowing affair and the 'inimitable' Dr Whelan

Among the leaked documents in the OPCW whistleblower affair is an account of a meeting between four of the organisation's staff and a group of toxicologists. The toxicologists were shown photos and videos of alleged victims from what was suspected to be a chlorine gas attack in Douma, Syria.

During the ensuing discussion the toxicologists voiced doubts about the use of chlorine and, based on the information given, were also unable to suggest an alternative chemical cause for the signs and symptoms.

The views expressed at that meeting, which took place in June 2018 and lasted about an hour, have since become a central plank of the anonymous whistleblower's claim that no chemical attack took place.

Last month, minutes of the meeting were posted online by WikiLeaks, together with a series of emails discussing an initial draft of the minutes.

In the leaked version of these documents various names and email addresses have been redacted – presumably by WikiLeaks or someone else involved in the leaking. The redaction process seems to have been given special attention because the file containing the emails is named "correctly_redacted_emails_re_toxicology_minutes.pdf".

Nevertheless, the redactions are not entirely consistent and it's possible to work out from the documents that three of the four staff who met the toxicologists were Sami Barrek (leader of the Douma investigation team), Soumik Paul (OPCW head of Health & Safety) and Marc-Michael Blum (head of the OPCW laboratory).

The name of the fourth person, however, has been consistently redacted and it's clear from the emails that this is also the person who wrote the minutes.

The puzzling thing here is why those involved in the leaking thought it necessary to conceal this particular name. It can't be to stop the OPCW finding out, because the other three staff already know who was with them at the meeting.

This suggests there was some other reason to protect the fourth person from being publicly identified but, again, it's rather odd because WikiLeaks is supposedly in the business of leaking information, not concealing it.

Separately from the leaked documents, al-bab has established that the mystery fourth person was Dr Brendan Whelan, originally from Ireland, who joined the OPCW as an inspector in 1998 shortly after its formation. He left the organisation in the second half of last year.

On the OPCW website there's only one mention of his activities – in connection with a presentation to the Scientific Advisory Board that he gave in 2017 on ways of resolving ambiguous results from chemical sampling.

His talk appears to have gone well and one OPCW staffer posted a photo on Twitter, describing it as a "fantastic presentation" by "the inimitable Dr Brendan Whelan". 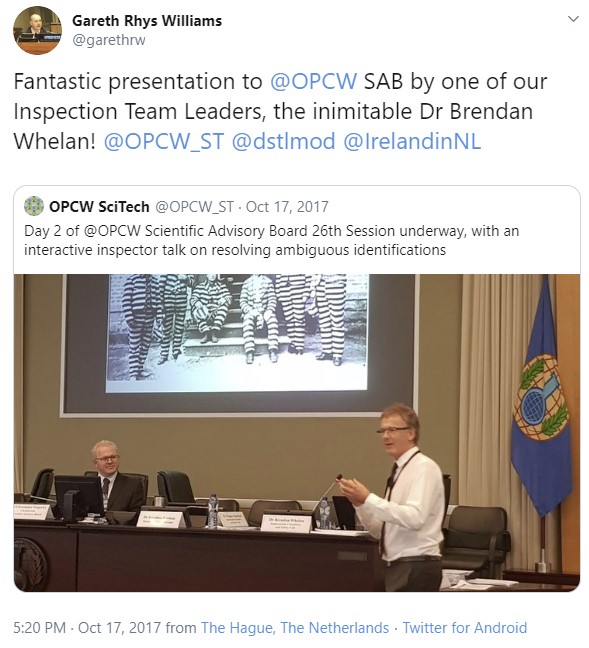 Despite the efforts to conceal Whelan's identity in the leaked version of the documents, a close look at them corroborates his attendance at the meeting with toxicologists and his role as the minute-writer.

Below is the redacted header from an email sent by the minute-writer. The sender's name and email address have been removed from the top line.

Helpfully, though, we still have the tail end of the address – from which we can see its length.

Now, here is a reconstruction of the email header, using the same font, and inserting Whelan's name and email address. The top line ends in exactly the same place (relative to the other lines) as in the redacted version.