Coronavirus in the Middle East: a hopeful sign in Iran?

Iran reported 595 new coronavirus cases on Monday, bringing the official total to 7,161. Although the official figures need to be treated with caution there are tentative signs that Iran's situation may be improving. The number of reported new cases has fallen steadily over three consecutive days, halving since its peak of 1,234 new cases on Friday.

However, the number of deaths in Iran remains high with 43 reported on Monday, bringing the official total to 237.

Across the rest of the Middle East a total of 565 people are known to have been infected – an increase of 74 since yesterday's update. The biggest rise was in the UAE with 14 new cases, followed by Israel with 11, and Lebanon and Saudi Arabia with nine each. 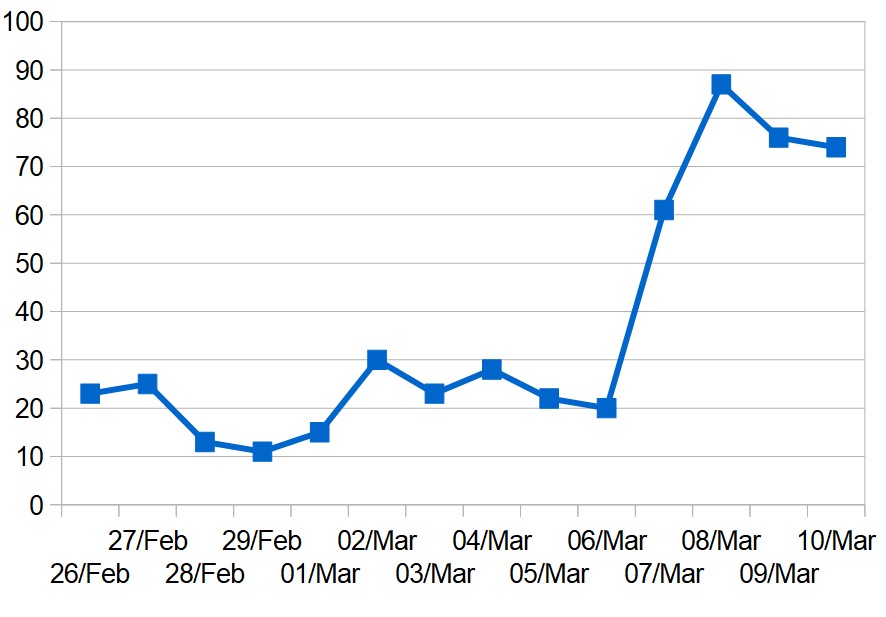 Fears grow in Israel and Palestine

The number of coronavirus cases in Israel has doubled during the last two days and now stands at 50. This prompted prime minister Netanyahu to announce that everyone entering the country, including Israelis returning from abroad, must go into self-quarantine for two weeks. Foreigners will have to prove that they have made adequate arrangements for this.

Israel's situation is also entwined with that of the Palestinians. The first cases on the West Bank were confirmed on March 5, resulting in the lockdown of Bethlehem. On Monday the Palestinian authorities reported five new cases – four in Bethlehem and one in Tulkarem, bringing the total to 25. Consultations are said to be taking place with Jordan (and probably Israel too) about a possible closure of the bridge between Jordan and the West Bank.

"The coronavirus outbreak puts Israel in a delicate position regarding the Palestinian Authority in the West Bank and Hamas in the Gaza Strip. The epidemic crosses borders and fences, but for now the intensive battle against the virus has contributed to the relative calm on the security front and has even led to close cooperation between the two sides. The big test will come in the next few days, when Israel will have to decide whether to lengthen the full closure that has been imposed on the territories for Purim."

Harel notes that Gaza's isolation (for non-medical reasons) has protected it from the virus up to now but if the virus does break out there Gaza will be "much more susceptible" than the West Bank:

"In any assessment by the security establishment in recent years, the eruption of infectious diseases in Gaza has been a prominent scenario, given the extreme overcrowding there, the collapsed infrastructures and the poor sanitary conditions." 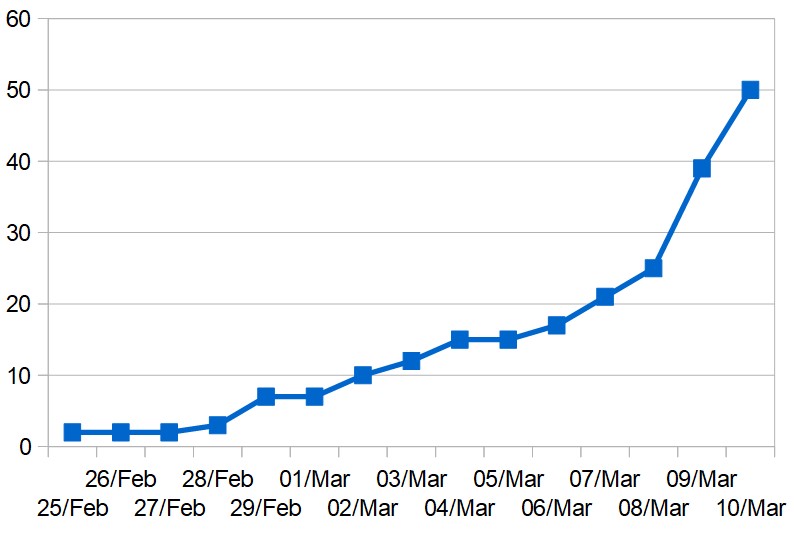 ● Bahrain: The health ministry closed a cafe in Sanad because it had been frequented by two people who were supposed to be in self-isolation. A hospital ward at Salmaniya Medical Complex was also closed after a doctor tested positive. A dentist at a private clinic has been suspended and reported to the public prosecutor for breaking the self-isolation rules.

● Egypt reported four new cases – three of them at a hotel near Cairo airport. An Egyptian man has also tested positive in Saudi Arabia while apparently on a trip to Mecca. Following an emergency meeting the Egyptian government has announced a ban on large gatherings. It also opened a coronavirus testing centre which – not unexpectedly – resulted in large gatherings of people wanting to be tested. Meanwhile, the authorities have issued a warning against con artists posing as government officials who claim to be able to disinfect people's homes. The much-ridiculed health minister, Hala Zayed, has again praised her ministry's efforts, asserting that Egypt is capable of overcoming and combating any viruses.

● Iraq announced six new cases – in Najaf, Basra, Erbil and Sulaymaniyah. A total of seven deaths have been reported, the latest involving a 74-year-old man who had returned from heart surgery in Iran three days earlier. Government offices are closed in Basra and the Kurdish area. Najaf province, a magnet for Shia pilgrims, will be closed to non-residents from Wednesday.

● Kuwait has extended its school closures until March 26. Details of other preventive measures can be found here.

● Morocco reported its third case on Monday – a 52-year-old French tourist who arrived in Marrakech on Saturday and presented himself at a hospital on Sunday after developing a temperature and respiratory problems.

● Saudi Arabia: Following the politically sensitive decision to impose a lockdown on the predominatly Shia city of Qatif, the authorities have given assurances that it has "an abundance of food supplies and other essential goods". They have also warned that people who fail to give correct health-related information when entering the kingdom could face fines of up to $133,000.

● UAE: Fourteen new cases were reported – four Emiratis plus others from Italy, Bangladesh, Nepal, Russia, Syria and India. This appears to be the first time that a Syrian has been recorded as having the virus.