From today Jordan's capital, Amman, is sealed off by the military and movement between the country's 12 governorates is prohibited. There are also restrictions on movement within the governorates.

As specified in the law, these powers include:

● Placing restrictions on the freedom of people to gather, move, reside, and arresting or detaining suspects or those who pose a threat to the national security and public order.

● Assigning any person to perform any work or service within their ability.

● Checking persons, places and vehicles without being bound by the provisions of any other law, and ordering the use of appropriate force in the event of opposition.

● Evacuating or isolating some areas and imposing curfew on them.

● Ordering some or all of public stores to open and close at specific times.

● Monitoring messages, newspapers, publications, pamphlets, drawings, and all means of expression, publicity and advertisement before they are published and seizing, confiscating, suspending, and closing the places where they were prepared.

● Preventing the manufacture, sale, purchase or possession of telecommunications equipment and ordering their delivery and seizure.

This doesn't necessarily mean all the powers set out in the law will be used, but potentially they could be.

In a letter to the prime minister, King Abdullah said the aim is to "protect the wellbeing of citizens", and that orders issued under the National Defence Law should "be within the most limited scope possible" without infringing Jordanians’ political and civil rights.

Iran reported 147 coronavirus deaths on Wednesday, bringing the official death toll so far to 1,135. This was the largest number of deaths recorded in a single day, and the number has increased every day since March 10.

A further 1,192 new cases were reported, bringing the official cumulative total to 17,361. For the fourth day running, this is below the peak of 1,356 new cases recorded on March 14.

In the rest of the Middle East, 180 new cases have been reported since yesterday's update, bringing the cumulative total to 2,440. This is the lowest daily increase in the last five days.

Excluding Iran, the regional death toll reached 33, with Algeria and Egypt each reporting two cases and Iraq one. 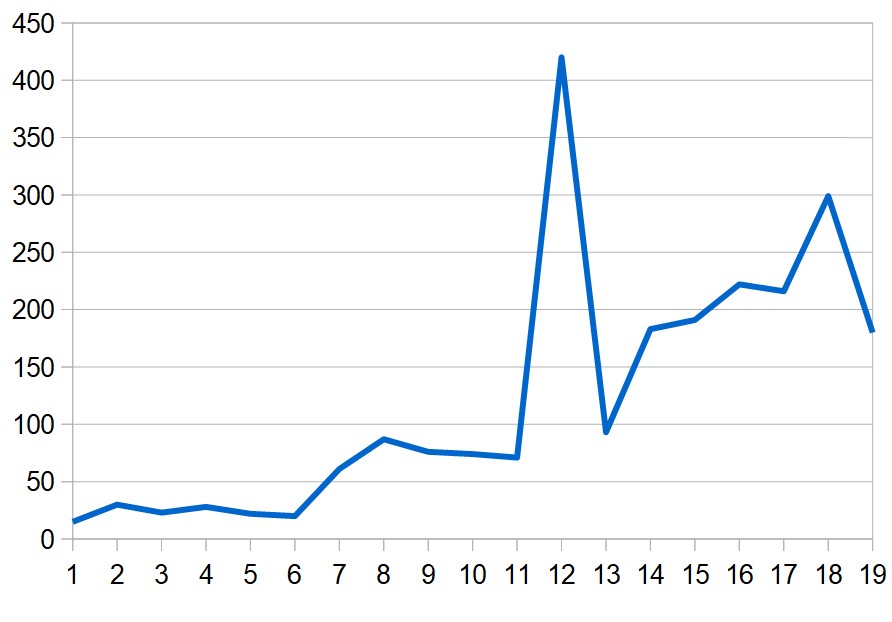 ● Iraq: The health ministry reported six new cases. They were identified among 105 samples from "suspected cases in hospitals in the various governorates". Given the conditions in Iraq, large numbers of other cases are almost certainly going undetected.

● Israel: Of the 433 diagnosed cases, 260 are hospitalised but only six are said to be in a serious condition. The IDF reported that nine soldiers have tested positive, mostly after returning from holidays abroad. A further 5,630 – career soldiers or those in mandatory service – are in quarantine. In the Jewish settlement of Beitar Illit, police dispersed a crowd of about 150 celebrating a wedding. The health ministry has forbidden gatherings of more than 10 people and one person from the wedding was detained for questioning.

● Kuwait: Of the 12 most recent cases, 10 have been linked to travel to Britain.

● Lebanon: The Hariri hospital in Beirut issued a statement about a woman who died shortly after being admitted on Wednesday. It said she had died of heart failure and a scan showed she had no lung infection – which may indicate she did not have coronavirus. The health ministry also noted the death of a nine-year-old child who is said to have been suffering from chronic diseases and, again, it's not yet clear if coronavirus is implicated.

● Morocco: Various posts on Twitter show that Britons in Morocco are struggling to get flights to take them home.

● Saudi Arabia reported 67 new cases – its biggest daily increase yet. However, the health ministry says 45 of these were travellers who had been quarantined immediately on arrival.

● Sudan: The World Health Organisation reported a second case in Sudan. In Kassala, near the border with Eritrea, two suspected cases have been quarantined. On Monday the authorities declared a state of emergency which included the sudden closure of Khartoum airport – forcing a Turkish airliner to turn back to Istanbul. As a result, more than 30 Sudanese now appear to be stranded in Turkey.