Coronavirus in the Middle East: latest updates, plus the question of Gaza

Although there are 35 known coronavirus cases among Palestinians in the West Bank, so far none have been diagnosed in Gaza. Given the siege conditions in Gaza, it's widely believed that an outbreak there would be catastrophic – and it may only be a matter of time.

The Israeli newspaper Haaretz reports that two people who returned to the West Bank from Rafah (neighbouring Egypt, at the southern end of the strip) have been isolated and hospitalised, though they are said not to be showing symptoms. Meanwhile, 1,400 Gazans are in home quarantine, supervised by Hamas.

On Friday, Israel delivered 200 coronavirus testing kits to Gaza but according to the Haaretz article Israel has not yet decided how to respond in the event of an outbreak there. Since the healthcare system in Gaza is unlikely to be able to cope, one option would be to evacuate patients for treatment in Israel, but Israel itself is expected to run short of hospital beds if the epidemic worsens.

"If the Gaza Strip is hit by an outbreak of the disease, given the critical condition of the enclave's medical system, there will be a need to declare a mass home quarantine for Gaza residents. The Turkish hospital, which was built two years ago in the Strip, is under consideration to be used to treat coronavirus patients exclusively, but the hospital is not yet in operation and has no staff.

"A field hospital has been set up at the Erez Crossing between Israel and Gaza with funding from an American organisation, but it has not yet been hooked up to infrastructure, and is also expected to face a medical staff shortage... Officials also pointed to the Trump administration’s decision to end American funding for the USAID and the UNWRA Palestinian refugee agency is another factor weakening the Palestinian healthcare system.

"In order to treat coronavirus patients, Gaza will need to use materials that Israel has banned from being brought into the Strip. Israel has not yet been asked to ease or temper its policy on importing goods, the official said. Israel may have to consider the entry of 'dual-use' goods – civilian materials that can be used for military purposes. For example, Israel imposes limits on hydrogen peroxide, which in addition to its use as a medical disinfectant can at certain concentrations be used to manufacture explosives."

The coronavirus crisis in Iran continues to worsen. The latest official daily figures show 1,289 new cases and 85 more deaths – the highest totals so far for both deaths and new cases in a single day.

Elsewhere in the Middle East 183 new cases were confirmed, bringing the cumulative total to 1,332. Qatar reported the highest number of new cases (75), followed by Saudi Arabia (24) and Kuwait (20). Sudan entered the list on Friday, reporting the diagnosis – and death – of its only patient so far. A ninth death was also reported in Iraq, bringing the number of fatalities in the region (excluding Iran) to 18. 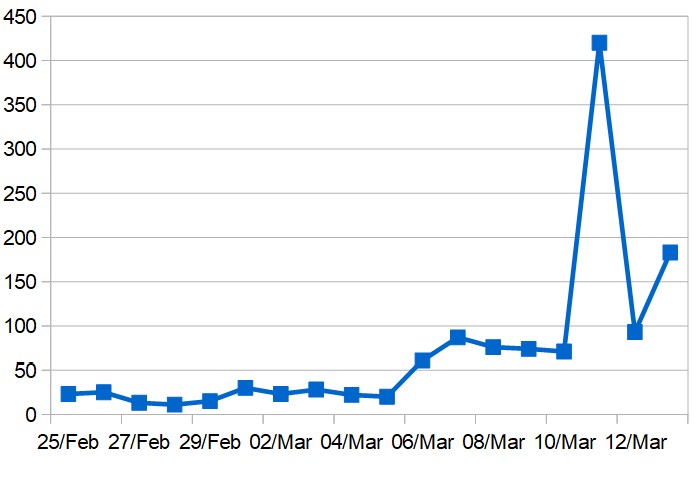 The World Health Organisation (WHO) says only nine of the 22 countries in the region have so far submitted their national COVID-19 reponse plans. The regional office is "following up closely" to receive plans from the others.

On Thursday, WHO complained that governments in the Middle East are not sharing enough information about coronavirus cases in their countries. "Less than 20% of all confirmed cases in the region have been officially communicated by countries to WHO," its regional director said.

● Bahrain reported 13 new cases. The health ministry also said "a number" of workers in shared accommodation had been tested for the virus. The results so far are negative and the health ministry says they will be quaratined for two weeks in their accommodation (which is provided by their employer) and will continue to be paid. No further details were given but it's likely they are a group of migrant workers.

● Iraq: In a post on Facebook, the Iraqi health ministry said the cumulative total of confirmed cases had reached 93. The virus appears to be widely distributed: the 10 most recent cases were in six different places. Details of restrictions on activities and movement in Iraq can be found in another of the health ministry's Facebook posts.

● Kuwait confirmed 20 new cases – fifteen of them Kuwaitis who had been quarantined after returning from Iran. Two more were Kuwaitis who had returned from Britain and the US. The others were two Egyptians and a Spanish citizen. The health ministry says it has so far carried out 7,525 coronavirus tests.

● Morocco: A French woman who arrived in Taroudant on March 2 from France is Morocco's eighth confirmed case. She is being treated in hospital in Agadir.

● Qatar reported 58 new cases on Friday night, followed by 17 more on Saturday morning. All but four of the new cases are said to involve "expatriate workers" (which is probably a euphemism for migrant labourers) – most of whom were already in quarantine. Following the discovery of three "expatriate" cases last Sunday more than 300 people from the same "residential complex" were quarantined and on Wednesday the health ministry announced that 238 of them had tested positive. Many of the latest cases appear to be from the same quarantined group.

● Saudi Arabia reported 24 new cases – seven of them Saudi citizens who had been quarantined because of contact with people found to be infected. The others newly diagnosed are 16 Egyptians and a Bangladeshi expatriate.

● Sudan: A 50-year-old man who died in Khartoum on Thursday was confirmed on Friday as Sudan's first – and so far only – coronavirus case. He is said to have visited the UAE at the beginning of this month.

● Syria: The Assad regime maintains that no cases have so far been detected in Syria. However, on Friday it announced that schools and universities will be suspended until April 2 and the working hours of government employees will be substantially reduced. These are described as "precautionary and preventative" measures.