Coronavirus in the Middle East: updates for March 11

On Tuesday Iran reported 54 more deaths from coronavirus, bringing the total to 291. The daily death toll has risen on each of the last five days, and Tuesday's figure is the highest yet recorded.

The authorities say a total of 8,042 people have been infected since the outbreak began. On Tuesday 881 new cases were reported – an increase on the previous day but still lower than the peak of 1,234 new cases reported on Friday.

Elsewhere in the Middle East, 71 new cases were confirmed, bringing the total to 636. Israel had the largest increase with 25 new cases, followed by the UAE with 15, Lebanon with 11, Qatar with six, Iraq and Palestine each with four, Kuwait with three, Bahrain with two and Tunisia with one. 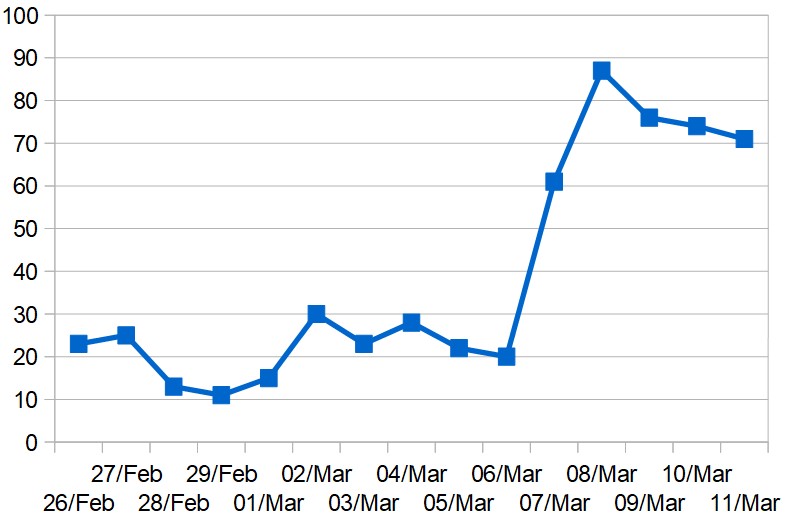 Aside from Iran, the graph for the rest of the Middle East looks mildly encouraging. After spiking on March 8, the numbers of new cases have shown a slightly downwards trend – though it's not the first time they have taken a dip, only to rise again later.

However, when we look at the graphs for individual countries some striking differences emerge. Here, for example, the curves for Lebanon and Israel are remarkably similar but Kuwait's is a totally different shape: 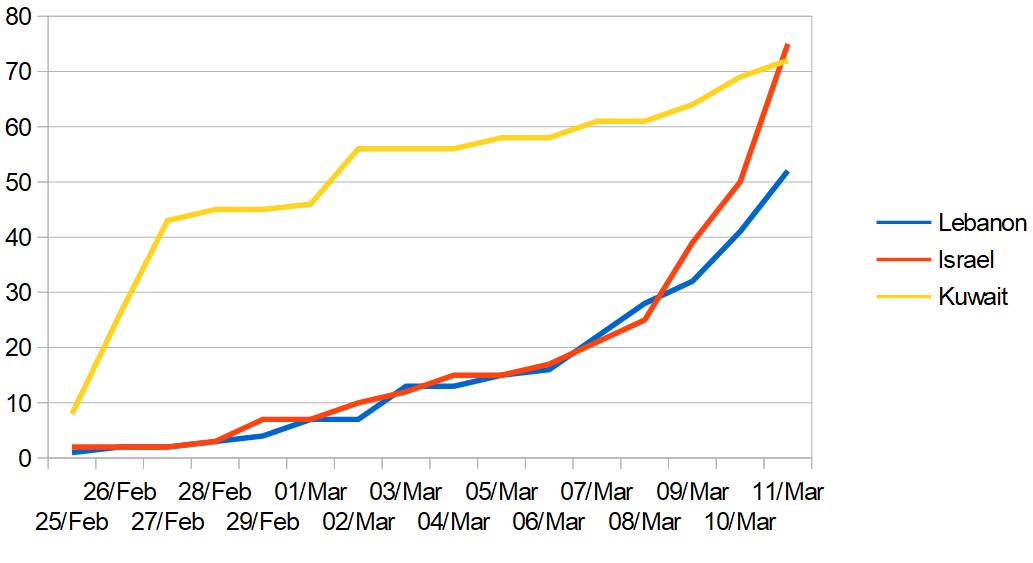 Up to now, Kuwait looks to have been the most successful at controlling the spread of the virus.

Underlying the overall figures there are two different types of cases being reported: those that arise among people who are in quarantine and the more dangerous ones that arise unexpectedly among people who may already have passed the virus on to others.

For that reason the relatively high totals of cases in several Gulf states – Bahrain, Kuwait, and the UAE – are less worrying than in some other places. Earlier in the outbreak they were busy repatriating their citizens from affected countries and quarantining them. Though details are not always clear, the vast majority of new cases appear to involve people who were being monitored. Bahrain, for example, says there have been no registered cases of person-to-person transmission within the local community.

Saudi Arabia may have a bigger problem because some of its citizens returned from secret trips to Iran without telling the authorities they had been there.

It's also worth keeping in mind that the published figures only show confirmed cases, as reported by governments. Nobody knows how many cases go undetected – and that's the real worry. There are wide variations in the quality of health services across the region and in some places the number of confirmed cases may relate more to the effectiveness (or not) of monitoring than the reality on the ground.

● Algeria: The health minister announced that "all sports, cultural, political and economic gatherings are cancelled". This raises questions about whether the authorities will try to ban the street protests against the government that have been taking place for more than a year.

● Bahrain: On Wednesday the govermnent announced the start of its "International Covid-19 Repatriation Programme". A chartered aircraft brought 165 people back from Iran – 77 of whom have been diagnosed with the virus. The returnees will now be "clinically segregated" at a "Specialist Repatriation Containment Facility". In line with al-bab's previous practice, these 77 cases are not included in the statistics above because they were diagnosed outside the country. [Update, 7pm March 11: It now seems they were diagnosed on arrival in Bahrain, so the 77 will be added to tomorrow's figures.]

● Jordan announced a series of travel restrictions which include closure of the land crossings into Israel and the West Bank. A cruise ship from Italy with 700 passengers was refused entry at the Red Sea port of Aqaba.

● Lebanon: A second death was reported on Wednesday morning – a 55-year-old man who is said to have had a weak immune system.

● Qatar has banned the smoking of shisha (hubble-bubble) pipes in cafes and restaurants. Shisha smoking carries a risk of coronavirus because pipes are often shared between users.

● Saudi Arabia joined Qatar in announcing a ban on shisha pipes in cafes and restaurants. Reuters news agency has a report from Qatif, the predominantly Shia area that was placed under lockdown on Sunday. People there are said to be stocking up on food and hand sanitisers but otherwise taking it pretty calmly.

● Syria continues to deny that anyone in the country has coronavirus but on Tuesday the official news agency did admit to some suspected cases. It said 34 people had been tested, though all proved negative. These included a woman at al-Mouwasat University Hospital who is being treated for pneumonia.

● Tunisia reported one new case among 44 people who were tested for the virus.