Diary of the Covid-19 pandemic: Oman

● SPREADSHEET
Statistics of new cases and deaths across the region, week by week 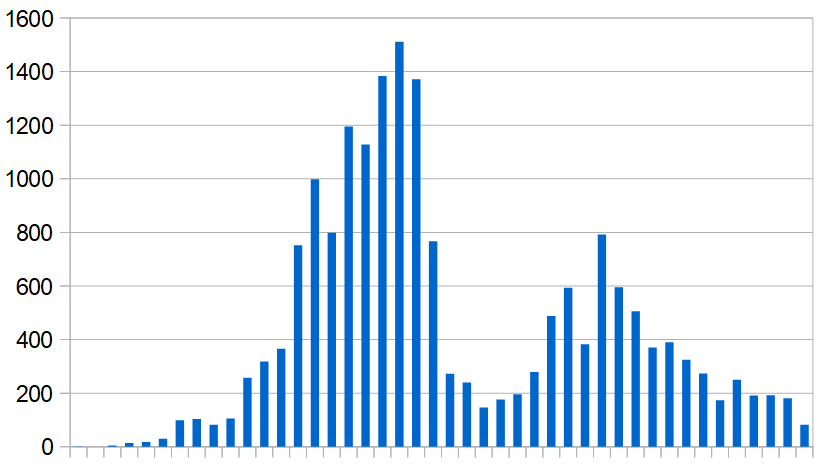 The first two cases were reported by the Health Ministry on Monday: two Omani women returning from Iran. Both are said to be stable and in quarantine. Two more cases (again linked to travel to Iran) were reported on Tuesday, bringing the total to four. Aviation authorities say flights to Iran are suspended until further notice.

Oman has reported no new cases. The operator of Oman's Khasab port announced it is suspending the import and export of all Iranian goods from Wednesday. Flights to and from Iran were suspended on Monday.

Oman confirmed two new cases on Thursday, bringing the total to six. Both new cases are said to be related to people who travelled to Iran and have been quarantined at home.

The health ministry announced that 1,320 people are in quarantine. Among the six previously confirmed cases, one person is said to have fully recovered and the symptoms of the other five are described as mild.

Oman, which has only six confirmed cases so far, is denying allegations of a new case in Dhofar. The health ministry is threatening to prosecute "those who publish or spread this rumour".

Oman reported three new cases "linked to travelling to Iran". One of the new cases is an Omani; the other two are Iranians.

Oman reported one new case on Thursday – an Omani who had visited the Italian city of Milan.

Oman has reported no new cases but a man who travelled to India from Oman on Friday died shortly after arriving. He was said to have breathing problems but it's not yet clear whether he had coronavirus.

Oman reported nine new cases, bringing the total to 33. Twelve of those previously diagnosed are said to have recovered. The health ministry says 29 of the confirmed cases are linked to travel abroad and remaining four are still being investigated.

Oman, which appeared earlier to be avoiding the worst of the pandemic, is now reporting substantial numbers of new cases – 106 more today. Of those, 71 are not Omani citizens. The problem is a familiar one in the Gulf states: migrant workers live in shared accommodation, sometimes with as many as 20 sleeping in the same room, and social distancing is virtually impossible. 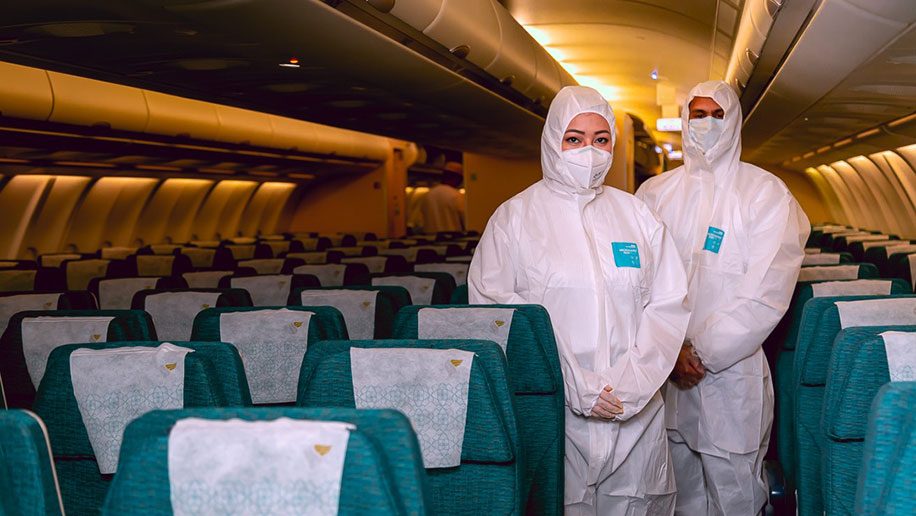 During the past week confirmed Covid-19 cases in Oman have risen by 62% and now total more than 13,000. On Wednesday alone, the Gulf state recorded 738 new infections.

Health minister Ahmed al-Saidi blames the increase on people socialising during the Islamic month of Ramadan (24 April-23 May) and the festival of Eid al-Fitr which followed.

"If you look at the figures the cases began to increase during the second half of Ramadan and then it just shot up during Eid because people are flouting the social distancing rules," he said. "The numbers have increased over the last few days because of this."

Covid-19 first arrived in Oman towards the end of February with travellers returning from Iran. The authorities took swift action, quarantining more than 1,300 people, and for a while their efforts seemed to be paying off.

That changed in mid-April when large numbers of cases began appearing among Oman's expatriate communities. Expatriates – mainly Indian and Bangladeshi migrant workers – account for about 43% of the population. As in the other Gulf states they have been disproportionately affected by the virus, mainly due to cramped living conditions. That is a continuing problem. Of the 738 new cases recorded on Wednesday, 414 (56%) were non-Omanis.

But it's clear that Oman also has a more general problem in getting people to abide by the rules for social distancing.

Gatherings of five or more people are forbidden unless they live together. Merely inviting someone to a party, a wedding or a funeral is an offence and Oman's penalties for violations are tough.

Taking part in a prohibited gathering can result in a fine of 1,500 riyals ($3,900) while shops that continue trading after being ordered to close can be fined twice as much. Several arrests were reported on Tuesday.

Meanwhile, the tourism ministry has issued detailed guidelines for hotel staff and guests aimed at minimising the risk of infection.While repeatedly warning the public to abide by the rules, the authorities are also trying to organise a gradual return to something approaching normality. Oman Air is preparing to resume services later this month and has been showing off the new uniform for cabin crew which comprises disposable body suits, masks, face shields and gloves.

Unfortunately for Oman, these attempts to open up come at an inauspicious time. While some Arab countries – notably Jordan, Tunisia and Palestine – have reduced new Covid-19 cases to a trickle, Oman's epidemic is still growing. Speaking on TV earlier this week, health minister Saidi said Omanis will have to "learn to live" with the virus.

Oman's outbreak grew slowly until the end of May but new cases have risen substantially since then. The health ministry says this has "nothing to do with" the reopening of activities. A ministry official blamed "continued indifference" by the public, saying that "most of the infections among citizens could have been easily avoided".

As in the other Gulf states, migrant workers in Oman have been disproportionately affected by the virus and according to figures released this week almost 40,000 have left the country since March. 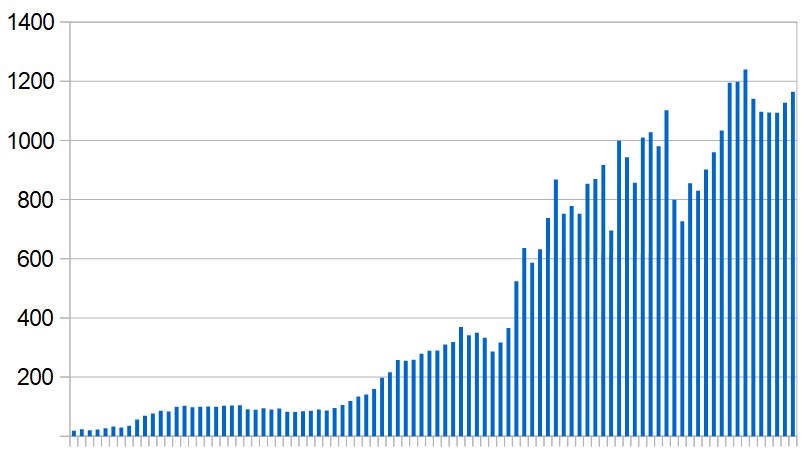 During the last two weeks the Gulf state of Oman has seen a shift in the pattern of its coronavirus epidemic. Previously, most of the new infections were occurring among foreigners – predominantly migrant workers from poor countries. That has now changed and the majority of new cases are Omani citizens.

Oman has recorded more than 45,000 cases since the outbreak began – almost one-third of them in the past fortnight. Describing the latest surge as "annoying, deplorable and frightful", last week the health minister lambasted members of the public for ignoring safety precautions.

"There is one person who went to work and shook hands with all his colleagues, and then he testified that his wife was infected with Covid-19. What can we call this behaviour?" he said.

There also appears to be a problem with employers failing to report suspected cases among their workforce – presumably to avoid disruption of their business – and the authorities are now threatening to carry out spot checks, with additional penalties for violations.

That changed in mid-April when large numbers of cases began appearing among Oman's expatriate communities whose cramped living conditions made them especially susceptible to infection. Expatriates, mainly Indian and Bangladeshi migrant workers, form a minority of Oman's population – around 43% – but account for 53% of the new cases recorded since mid-April.Covid-19 first arrived in Oman towards the end of February with travellers returning from Iran. The authorities took swift preventive action and for a while their efforts seemed to be paying off.

Since April 16 the health ministry has reported separate figures for Omanis and non-Omanis in its daily updates (see spreadsheet).

Analysis of these over the last eleven weeks shows that in the first week Omani citizens accounted for only 36% of new cases. During the ensuing eight weeks the figure never rose above 45%.

It was not until the week before last that Omani cases outnumbered non-Omanis cases for the first time, and a week later they have now reached 65%. 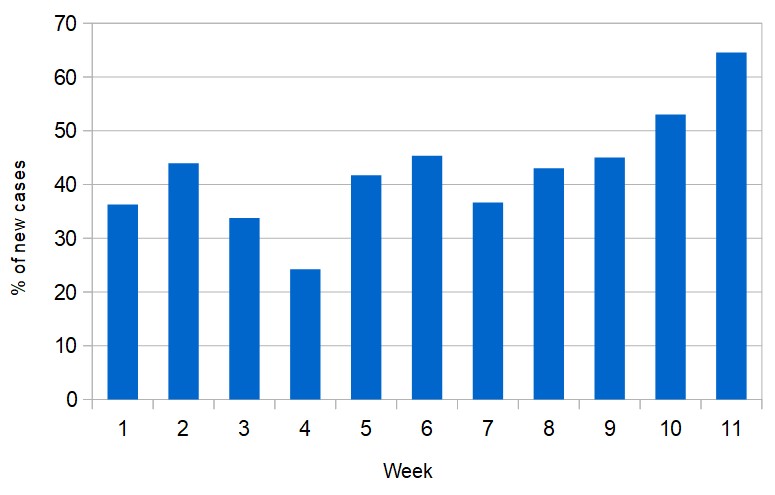 There appears to be a problem with employers in Oman failing to report suspected cases among their workforce – presumably to avoid disruption of their business – and the authorities are now threatening to carry out spot checks, with additional penalties for violations, including fines of $295 for not wearing face masks in workplaces.

Oman has so far recorded 64,000 cases – most of them during the past month. Previously, most new infections were occurring among foreigners – predominantly migrant workers from poor countries. That has now changed and the majority are Omani citizens. Among the 1,169 new cases announced on Friday, only 32% were non-Omanis. The health ministry blames "continued indifference" by the public, saying that "most of the infections among citizens could have been easily avoided".

On Wednesday, nine people were each fined 1,000 riyals ($2,600) for their involvement in a gathering that was prohibited under the coronavirus restrictions.

Oman has so far recorded almost 74,000 cases – most of them during the past month.

A new lockdown will begin later today and is due to last for two weeks. This includes a curfew from 7pm to 6am when movement on foot or in vehicles will be forbidden. Public spaces and shops will be closed and all gatherings are banned – including activities relating Eid al-Adha. Police say violators will be fined 100 riyals ($260).

More than 600 medical staff in Oman have been infected with Covid-19 since the outbreak began, a government official said this week.

New infections peaked in mid-July with just under 1,600 cases a day but are now on a downward path. By Friday the seven-day average had dropped to 930 a day.

The health ministry says it will not issue any further figures until August 5 (presumably because of the Eid al-Adha holiday).

Oman currently has a curfew from 7pm to 6am when movement on foot or in vehicles is forbidden. Public spaces and shops are also closed during the curfew and all gatherings are banned – including those related Eid al-Adha. Police say violators will be fined 100 riyals ($260).

The night curfew is due to be shortened by three hours from today and will run from 9pm to 5am. Restrictions on movement between the various governorates are also being lifted but the Dhofar region will remain under lockdown.

The night-time curfew (9pm to 5am) is due to end today.

New cases averaged 147 a day this week – a substantial drop to levels not seen since early May.

This week the authorities issued a long list of rules for people visiting restaurants and cafes.

The health ministry has provided some demographic information about Covid-19 infections in the sultanate:

Update on vaccines: Oman aims to vaccinate 40% of its five million population and says it has reserved an initial batch of more than 1.8 million doses which it hopes will arrive before the end of the year.

It's not clear who will be supplying the vaccine and the health minister has said Oman is seeking to obtain it "from any internationally accredited institution".

Update on vaccines: Oman has ordered 370,000 doses of the Pfizer/BioNTech vaccine – 27,000 of which had been delivered by the end of January. Further supplies have been delayed by production problems at a factory in Belgium, causing Oman to slow down its roll-out.

In the meantime, India has donated 100,000 doses of the AstraZeneca vaccine produced at its Serum Insititute and as a result of this a new vaccination campaign is due to begin in Oman on Sunday, targeting people over the age of 65.

The Indian donation is seen as token of the close between the two countries. Oman has a large Indian expatriate community and many Omanis have Indian ancestry.