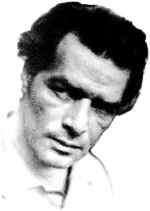 Poet, playwright, actor, critic … during his short lifetime Naguib Surour [or Surur] courted adulation and notoriety in equal measure. His work was meant to shock - and it did, though many thought all the more highly of him because of it.

Born in June 1932, he graduated from the Egyptian Institute of Acting in 1956 then travelled to Russia to take a doctorate in drama. Returning in to Egypt 1964, he made his debut as a director at the Pocket Theatre with Chekov's Cherry Orchard. He taught at the Academy of Theatrical Arts until the mid-1970s when bouts of depression began to take their toll. He died on 24 October 1978, at the age of 46.

Accounts of his life reveal a wild, troubled soul who embarrassed friends as well as enemies and was regarded by some as simply mad. But, as Mahmoud el-Lozy noted in al-Ahram Weekly, he would never compromise his art in order to please the authorities: "He could not be bought, co-opted, corrupted, or bribed. If this is madness then Egypt is the sanest country in the world."

His most famous poem is Kuss Ummiyyat (see below) - an outpouring of rage written in the aftermath of the 1967 Arab-Israeli war. Though never formally published in Egypt, it was widely circulated and still has the power to make waves, even today.

wadada.net
A tribute to Naguib Surur by his son, Shohdy. Includes several poems in Arabic and a photo album. [Archived files from deleted website]

Rebel with a cause
An appraisal of Surur's life and work by Mahmoud el-Lozy (al-Ahram Weekly, 22 October, 1998).

Below is a list of Naguib Surur's main works, with links to the Arabic text where available. Very little has been translated. Two translations on the internet are:

Luzum ma Yalzam
Translated into Spanish, with an introduction by Santiago Alba.

Kuss Ummiyyat (referred to in polite circles by its shortened title, "al-Ummiyyat") is a dark satire of more than 6,000 words, written in colloquial Arabic.

Mahmoud el-Lozy describes it as a direct and forceful stream of abuse, invective and lyricism that seems to come straight from the subconscious:

"Surur challenges, ridicules and denounces all aspects of official culture and its representatives, and reminds us of everything that official culture forgets, ignores, or falsifies. The list of institutions, individuals and subjects he targets is almost endless …

"In the midst of torrents of abuse and subversive and obscene inversions of popular and folk sayings and songs there are also some of the most lyrical passages ever to be found in modern Egyptian poetry."

Tapes of Surur reciting the poem were circulated but it has never been formally published in Egypt. In 2000, the poet’s son, Shohdy - who was then 38 - posted Kuss Ummiyyat on his website, wadada.net (since deleted).

About a year later, the Egyptian authorities noticed it and Shohdy, who was employed in Cairo as webmaster of al-Ahram weekly, was arrested in November 2001 on obscenity charges. Although the poem was on a website hosted in the United States, not Egypt, Shohdy was sentenced to a year in jail but fled to Russia while his case - which had been treated as a matter of national security under Egypt’s emergency law - was awaiting an appeal.

An archived copy of the poem is still available in Arabic.

A selection of articles about Shohdy’s arrest can be found below:

Appeal hearing next week for journalist sentenced to prison for putting poem on website
Reporters Without Borders, 11 October, 2002