In a rare moment of international consensus over Syria, everyone now seems to accept that chemical weapons were used near Damascus last Wednesday. The continuing dispute is about who used them, with Russia, Iran and the Syrian regime claiming that rebel fighters were responsible.

Regardless of who did it, the use of chemical weapons has implications far beyond Syria itself. It's a matter of global concern. Internationally, chemical, biological and nuclear weapons are treated as a special class of weaponry that needs to be controlled. If that position is to be maintained, anyone who uses them must face international retribution – otherwise, their use will gradually become normalised.

A very important principle is at stake here – a principle so important that it should be separated, as far as is possible, from other issues in the Syrian conflict as well as the politics of that conflict. Addressing the use of chemical weapons in Syria should be a goal in itself; it should not become the pretext for a generalised direct military intervention of the kind that happened in Iraq in 2003.

That said, it's difficult to see what form a response might take in Syria (and, as I argued last week, that was probably central to Assad's calculations in launching the chemical attacks – assuming they did indeed come from the regime). Bombing chemical weapons facilities could be hazardous and a no-fly zone would not necessarily stop attacks since it's unclear whether the chemicals last week were launched from the air.

An Iraq-style attempt to locate and dismantle Assad's chemical weapons, besides being largely impractical in the present circumstances, would politicise the issue and kick it into touch. The regime justifies its possession of chemical weapons as the poor man's defence against Israel's nuclear arsenal – and Israel, along with North Korea, India, Pakistan and South Sudan, is one of the five countries worldwide that do not accept the Nuclear Non-Proliferation Treaty.

Equally, if it did turn out that rebel fighters were responsible, some course of action would be needed to deal with that too.

Although it seems very likely that the regime was responsible for the attacks near Damascus last Wednesday, the evidence so far made public is still less than required to pronounce Assad indisputably guilty. At the same time, though, the regime's behaviour scarcely suggests it believes its own claims of innocence and as yet no credible evidence has been produced that points to rebel fighters as the culprits.

The claims put forward so far by Russia and the Syrian regime are laughably crude and look more like an attempt to cause confusion than to persuade anyone of the truth.

On Friday, for example, Russian Foreign Ministry spokesman Aleksandr Lukashevich, cited "reports circulating on the internet" that videos said to show victims of the Wednesday's massacre had been posted on YouTube several hours before it happened. Others pointed out that a Reuters report of the massacre had also appeared on at least one website with the previous day's date.

This was obviously the result of automated time-stamping in different time zones around the world (see explanations
here and here) but the fact that Lukashevich thought it worthy of comment suggests the Russian propagandists are scraping the barrel for anything that might justify their position.

The Syrian regime, assisted by the Russians, has been trying for some time to link rebel fighters to "chemicals" and to link supplies of "chemicals" to Arab states opposing the regime.

Last month Russia Today broadcast clips from Syrian state TV (see below) of poisonous materials allegedly found in a rebel "laboratory". The only identifiable substance in the video was a series of bags labelled as caustic soda produced in Saudi Arabia. Caustic soda has multiple everyday uses, though it can also be used to neutralise sarin.

Images of other supposedly sinister rebel-held equipment include supplies from the Qatari-German Company for Medical Devices (see below). 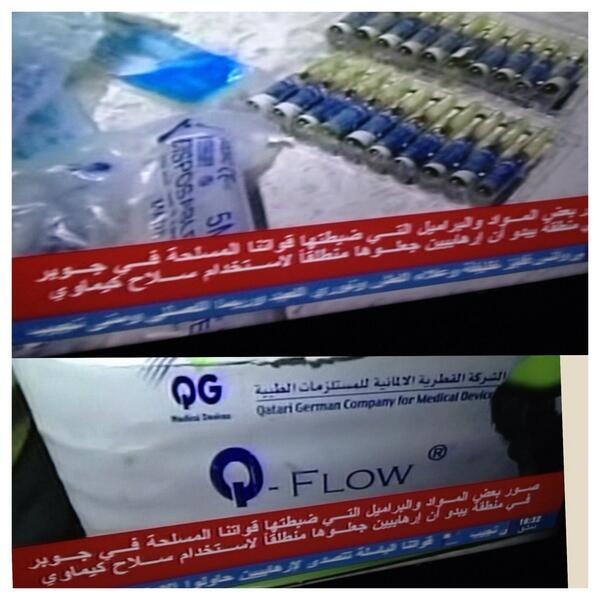 One regular pro-regime Tweeter (@ana_cherine) re-posted the picture yesterday with a caption saying:

Apart from the ludicrous idea that vaccines are a protection against chemical weapons, what the pictures show is standard medical equipment.

The label "Q-Flow" refers to an intravenous cannula system made by the Qatari-German company. More detailed images in a video (here, at 1 minute 25 seconds) shows a pack of Maxitex surgical gloves and ampoules that are said to contain atropine.

Regarding atropine, the Syrian regime is using exactly the same argument that the US used in connection with atropine and Iraq in 2002 – guilt by association.

Atropine is used for treating various heart and respiratory disorders. It is also the drug of choice in cases of organophospate (pesticide) poisoning. In 2002, scare stories in the American media largely ignored these uses and instead highlighted it as a well known antidote to nerve gas (which it is too), and the Bush administration moved to block Iraq's supplies.

For the Bush administration, possession of something that could protect against chemical weapons was deemed to be evidence of possessing the weapons themselves. "If the Iraqis were going to use nerve agents," one US official explained, "they would want to take steps to protect their own soldiers, if not their population." The Assad regime now seems to be playing the same game.

In the latest development in this propaganda war, Syrian state TV said yesterday that troops had found "chemical agents" in rebel tunnels. An unidentified "news source" was quoted as saying: "Army heroes are entering the tunnels of the terrorists and saw chemical agents ... In some cases, soldiers are suffocating while entering Jobar. Ambulances came to rescue the people suffocating in Jobar."

It will be interesting to see what further evidence they produce in connection with this.