Bouteflika offers reform in Algeria, but is it just a ruse? Algeria's 82-year-old president, Abdelaziz Bouteflika, was formally nominated yesterday for a fifth term in office, even though the current constitution says he is limited to two terms.

Bouteflika, who is in poor health and uses a wheelchair, is reported to be in Switzerland for medical tests and the nomination papers were submitted on his behalf by his campaign manager. The election is due to take place on April 18.

The BBC notes that according to Algeria's electoral commission nomination papers have to be submitted in person, though the Constitutional Council disagrees.

Bouteflika has been in power since 1999 and there have been widespread demonstrations for more than a week, protesting against his effort to cling on until 2024 (see previous blog posts here, here and here).

Bouteflika no longer makes speeches but in a letter circulated yesterday (full text here) he offered a series of concessions to the protesters:

1. A national dialogue for reform
2. A new constitution
3. A fairer economic system which tackles corruption
4. Inclusion of young people in public life
5. Reform of the electoral system
6. A change of president through an "early" election

Not surprisingly, the initial reaction to this on Twitter was scepticism: 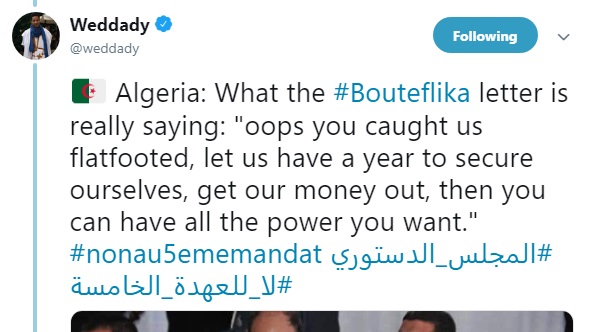 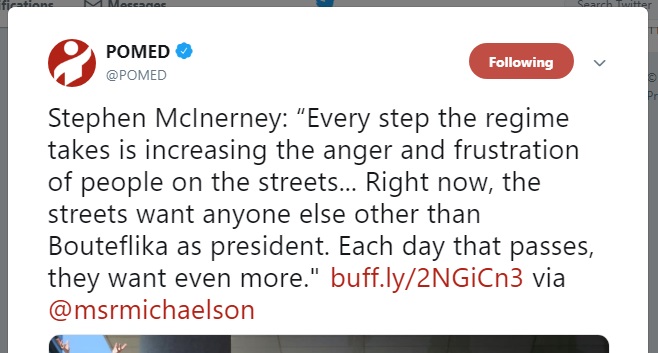 The Algerian system certainly needs reform and the letter's proposal of a national dialogue would be an obvious way of starting the process.

The problem, though, is that the concessions have been offered under duress and in exchange for Bouteflika's re-election. The key question is whether the regime will be eager to implement them once Bouteflika has secured another term.

The letter does indicate that he will step down "early" in his fifth term but there's no certainty it would happen.

We might also ask why, if the regime is serious about reform, Bouteflika needs be in charge of the process, especially when his capacity is limited by his poor state of health.

Given the current mood in Algeria, the public are unlikely to be persuaded of the regime's sincerity without a concrete signal of its commitment to reform. One way of doing that would be to withdraw Bouteflika's nomination and put forward an alternative candidate who would act as a transitional president overseeing the reforms.

On a historical note, it's worth comparing Bouteflika's letter with the speech made by President Ben Ali of Tunisia in response to popular protests in 2010 – a couple of weeks before he was overthrown.

In the early stages of the Syrian conflict President Assad also gave a speech in which he acknowledged the protesters' grievances, touched on most of the key areas where reform was needed and urged a more open, consultational style of government. It didn't happen.