On Saturday police in the Indian city of Mysore raided a ceremony where more than 100 people dressed in gowns and mortarboards were about to receive fake degrees.

The would-be graduates had paid up to 100,000 rupees ($1,357) for doctorates from the bogus International Global Peace University, according to the police. Three people were arrested.

The raid (video here) came little more than a month after Indian police began investigating another institution – the so-called Ballsbridge University – following a tip-off from authorities in the Caribbean island of Dominica.

Meanwhile, two real universities in India have also been accused of selling degrees and the credentials of all Indian engineers working in Kuwait are being re-examined after some were found in possession of forged certificates.

Fraudulent qualifications are a growing problem in many parts of the world. Unaccredited "universities" need little more than a website. They avoid the need for a physical campus by claiming to teach by distance learning but often award degrees on the basis of "life experience". This is much cheaper than studying at a recognised university and usually requires far less effort.

Several unrecognised universities have recently come to light in Europe which focus particularly on attracting "students" from Arab countries (reports here and here).

The "International Global Peace University" which was at the centre of Saturday's aborted degree ceremony claims on its website to have "given a new meaning to online education" and says it is "internationally accredited" – though it doesn't say who gave the accreditation.

The website was registered anonymously two years ago in the Indian state of Tamil Nadu and it doesn't take much scrutiny to see that the university is a fake.

There's a page on the site with a message from the university's purported "chancellor" (whose name is not revealed) and there is no information about any of the teaching staff.

Another page, setting out criteria for awarding honorary doctorates, says: "Recognition will be given to those whose exceptional accomplishments have contributed to enhancing culture and society in Canada ..."

Why an Indian university should be so interested in enhancing Canadian culture becomes clearer after a Google search. The criteria have been copied from somewhere else without bothering to read them properly. The same sentence can be found on the websites of at least two other fake (and non-Canadian) institutions – the similarly-named Global Human Peace University and the Hawaii-based Abiding University.

The International Global Peace University also has a page of FAQs with content plagiarised from other sources on the internet.

Fake universities are not usually difficult to detect, especially when their websites are compared with those of genuine universities, but many people are still deceived. On Sunday, India Today published a list of tips to help students and potential employers spot them.

The Indian University Grants Commission also publishes a list of fake universities known to be operating in the country. There are currently 24 but the International Global Peace University is not among them – it appears to have been discovered only recently.

Ballsbridge University, which is not listed either, claims to be based in Dominica with affiliated colleges in 17 countries. However, it is believed to be run from the Indian state of Kerala by a man called Pappachen Baby.

Last year Ballsbridge awarded an honorary doctorate in sports management to Karnam Malleswari, the first Indian woman to win a gold medal at the Olympics. At the time, Ms Malleswari declared herself "honoured and privileged" to have received it. Other recipients include prominent Indian scientists and business figures. 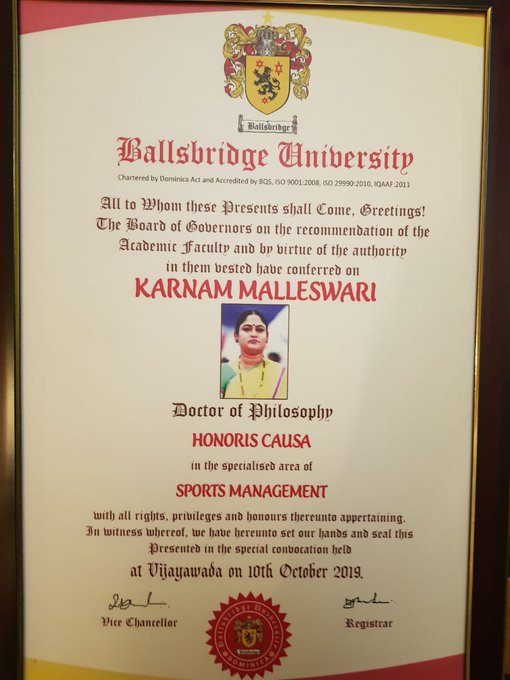 Ballsbridge University's website offers honorary bachelor's degrees without any academic work to applicants who have "ten years of experience in a particular field", pay a fee and provide a "donation or statement of support for future students of BU as a role model or trustee".

Recipients of Ballsbridge's honorary doctorates have to be nominated by someone else, according to the website, but they also have to pay a "reasonable handling fee" and, apparently, donate money towards "research projects".

The profusion of certificate scams is beginning to cause problems for people with genuine qualifications. Thousands of degree certificates from Alakh Prakash Goyal Shimla University and Manav Bharati University – two private Indian institutions with official recognition – are alleged to have been sold over a seven-year period and investigations are continuing. Students who worked hard for real degrees from these universities fear the scandal will bring their own qualifications under suspicion.

Engineers under suspicion in Kuwait

A similar problem has arisen in Kuwait where around 1.4 million Indian expatriates live and work. The Kuwaiti authorities are trying to reduce the country's dependence on foreign labour and have begun turning away or expelling those who can't prove their qualifications are genuine.

Last week the Kuwait Society of Engineers anounced that it had discovered 160 cases of forged certificates. These are said to have come to light because of a switch to online registration because of the Covid-19 outbreak. As a result, the society has temporarily suspended accreditation for Indians seeking work permits as engineers in Kuwait.

Indians already working in Kuwait as engineers will be unable to renew their residence permits unless their certificates are accredited by India's National Board of Accreditation (NBA). One problem with this is that the NBA was not established until 1994 and many of the engineers working in Kuwait obtained their certificates before it existed. Others studied at colleges that have since closed down and are thus not recognised.

The Times of India reports that some qualified engineers in Kuwait have now been demoted – with a pay cut – because of problems with their certificates.

A mechanical engineer, who graduated from the University of Calcutta in the 1980s, told the paper: "It’s humiliating for an experienced person to prove himself that he is an engineer every year while renewing his residency visa."

UPDATE: The following communication in connection with Ballsbridge University was received from Professor Sir Charles Idahosa Osemwede, who states that he is the lineage prince of the royal dynasty of Benin and chair of Ballsbridge's Board of Quality Standards.

"There was a recent information in your blog about Ballsbridge University which was rather misleading and have given bad image to  these good institution which has been training Africans and trying to stop the European migration of Africans by providing them affordable education and skills.

"Some affiliated centres in India since 2019 were given affiliation to promote our good work to poor Indians but instead misused their trustworthiness and they were removed but started conspiracy against our appointed representative.

"Their bachelor is at Ballsbridge qualifications framework ( BQF) level 6 and 4 years of learning 120-180 GAAP credits, masters 45 GAAP and duration 1/2 years depending on course. PhD is 3 years and minimum credits 60 GAAP credits. One GAAP Credits is 40 hours of learning. All students are required to complete their modules since many are on scholarships.

"The recent conspiracy in India shows that people don't value something unless they pay it. We have trained several poor India in several disciplines free of charge and many are now working and caring for their families but none of them defended this great institution sponsored by billionaire Prince Thomas who died in 2014."