The ups and downs of coronavirus in the Middle East

More than half a million people in the Middle East and North Africa have now been infected with the Covid-19 coronavirus according to official figures, and the number is increasing by about 12,000 every day.

Official figures don't tell the whole story, though. Nobody knows how many cases have escaped detection, and some countries are better at detecting them than others. But when those factors are taken into account it's still possible to discern some general trends.

Among most of the 20 countries in the region monitored by al-bab – Arab countries plus Israel and Iran – the initial wave of infections caused by the pandemic has passed its peak and the goal now is to get the number of new cases down to manageable levels, if not to eliminate them entirely.

The most worrying exceptions to this, discussed in previous reports, are Iraq, Libya, Sudan and Yemen. Their health services are not up to the task and their ability to track infections is limited by shortages of testing equipment and/or internal chaos.

There's also Iran, the first country in the region to be stricken by the virus, where the epidemic rumbles on with no end in sight. Iran's initial wave peaked at the end of March and subsided during April, briefly dipping below 1,000 new cases per day according to government figures, only to rise again.

After a second peak in late May it is now subsiding again but Iran is still reporting more than 1,500 new cases a day and its official daily death toll is by far the highest in the region.

One indication of how fast the virus is spreading in a particular country is the rate of increase in the number of confirmed cases. Looking at the region as a whole over the past week we can see some wide variations, from zero in Tunisia to a 69% increase in Sudan.

Comparing that with the previous week's figures we can also see that the rate has decreased in 13 of the region's countries and increased in seven of them (though in four countries the changes are marginal).

This is just one small snapshot and it needs to be interpreted in the light of local circumstances. For the underlying data, covering a much longer period, see this spreadsheet.

In North Africa, Tunisia has made the most progress and transmission of the virus inside the country seems to have stopped. Morocco and Algeria are some way behind but both have reported a significant drop in new cases over the past month.

Egypt is more of a puzzle, partly due to a lack of transparency, but it clearly has a much larger epidemic than any of its neighbours. Based on the official figures, Egypt has 389 confirmed cases per million inhabitants compared with only 242 in Algeria and 231 in Morocco.

The main reason for Egypt's relatively high numbers is that the Sisi regime has been trying to avoid economic damage and it made a decision to "coexist" with the virus until a vaccine becomes available. Egypt has recorded more coronavirus-related deaths than any other Arab country (1,377). Over the last 10 days or so the official figures suggest new infections may have reached a plateau – though it could be temporary.

East of the Mediterranean, Israel, Palestine, Jordan, Lebanon and Syria appear to be coping reasonably well. Among those, Israel has by far the highest number of recorded cases (18,701). Its epidemic peaked in early April and new cases dropped back to around 25 a day in May. There has been a resurgence since then, mainly due to the lifting of restrictions and the reopening of schools, but it is still well below the levels of the initial wave and should be controllable.

The outbreaks in Palestine, Lebanon and Syria have so far been small and show no signs of growing exponentially.

Given the nature of the Assad regime, some regard Syria's official figures as suspect but there's no hard evidence that they are untrue. The official figures don't include areas of Syria that are outside the regime's control and if the virus takes hold in the north of the country where many displaced people have taken refuge, the picture could change dramatically. So far, though, only six cases have been detected in north-eastern Syria and none in the north-west.

In the early stages of the pandemic many countries closed their borders, leaving large numbers of citizens stranded abroad. More recently, thousands have returned – some bringing the virus with them. These inflate the statistics of new cases, though if returnees are properly quarantined they shouldn't infect anyone else. Local transmission within the community is a much bigger concern.

Jordan is one country where imported cases have swelled the numbers, making the picture look worse than it actually is. Jordan's imported cases are a mixture of returning citizens and cross-border truck drivers arriving mostly from Saudi Arabia. There are still a few locally-generated cases inside the country but the authorities seem quite efficient in tracking down contacts.

The six Arab states of the Gulf – Bahrain, Kuwait, Oman, Qatar and the UAE – have also imported cases along with their returning citizens but they have two bigger problems. One is non-compliance with lockdowns and preventive measures by some sections of the public. The other is the disproportionately high number of cases among migrant workers from poorer countries whose living conditions make them especially susceptible to infection.

Among these Gulf states, Saudi Arabia has the largest number of confirmed cases (116,021) and its epidemic shows no signs of abating. Its latest daily count of new cases (3,733) is the highest so far. Oman is also showing increases.

Bahrain's rate of increase has slowed but it's unclear yet whether a peak has been reached.

In Kuwait, the latest figure for new cases (based on a seven-day running average) is 541 – well down from the peak of 1,071 on May 23. The UAE also seems to have peaked around the same time and new cases are dropping steadily, if slowly.

Qatar – which has the largest epidemic when adjusted for population size – is also showing some hopeful signs. Its latest daily count of new cases is the lowest since mid-May.

A further 12,439 Covid-19 infections have been reported in the Middle East and North Africa since yesterday's update. 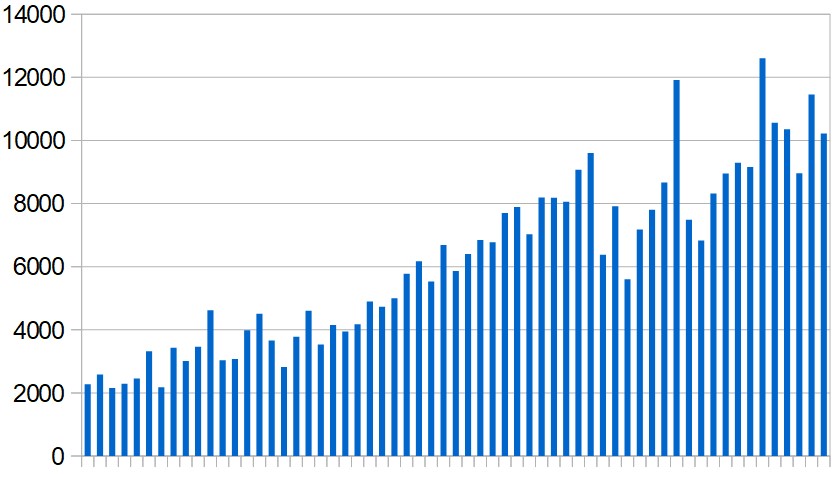 A further 224 coronavirus-related deaths were reported in the region yesterday – 78 of them in Iran.